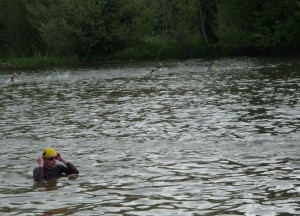 This race was going to be my first A race of the season. It is a bit early in the year to have an A race but that’s the way the cookie crumbles.

It was the British Sprint Championships, also a qualifier for this year’s Worlds & a qualifying race for next year’s Europeans which was going to be my goal for this race as I was going to be in a new age group (50-54 – getting old now!!!).

We drove up on the Saturday morning & arrived lunch-time-ish.  We went to have a little look at the River Ouse & transition.  I wasn’t able to register as we were a bit early so we headed off to drive the bike course.  After that I did my usual pre-race bike (20mins) & run (10mins).  When I did my bike ride I reccied the last 3 miles of the bike course, which was good as it involved a mandatory pinch point, a tight left-hand turn & a fast descent back into transition, so I got a good feel for the last bit of the bike course.  When I got back I was able to register.

After that we headed off to our hotel & relaxed for the rest of the afternoon.  We had a leisurely dinner before enjoying a good night’s sleep.

Race morning dawned still very windy but not too cold.  We arrived at the race venue.  It was very busy as there were over 900 competitors, all vying for slots & titles.  A lot of fit, fast looking men & women.  I racked my bike with plenty of time to spare but I had to go back to adjust my transition towel & run shoes because the Race Referees weren’t happy with the way I had set them out.

Race briefing was at 7:45 with the first wave in at 8am prompt.  I was in the 6th wave at 8:25am.  There were 95 people in my wave, which also included the 55-59 age groupers as well.  The water was 13.5 deg C, it was still a bit fresh but as I had done two sea swims during the week running up to the race (not too much swimming but acclimatising to the coldness) the river didn’t feel that bad.  I decided to start on the left-hand side, close to the bank because I had worked out that on the right-hand side the turn-around buoys had a curve, so the left-hand side was more direct.  I got to the turn-around point with no untoward problems, possibly holding top 5 positions.  On the way back we were heading upstream & although the current wasn’t too fast, I could feel the difference.

I exited the river & headed off to T1 & this is where my first & only problem of the day occurred.  My bike was only about 10mtrs from the exit of the river & I knew that I had to have a good T1 but the coldness of the water had made the tips of my fingers go numb so when I went to grab the back of my wetsuit to peel it off, I could feel the Velcro release / zip but just could not pull it down.  So I just had to compose myself & kept trying & eventually it came off.  I went to put on my helmet & my fingers still weren’t working properly to do up the buckle, but finally I exited transition, running like Usain Bolt to try to make up the time.

I headed off onto the one lap, 25K bike route which included two reasonable climbs on the course.  I got into my rhythm quite quickly & was overtaking a few people from the previous wave but did get overtaken by four people from my own wave.  Coming back into town, & remembering my reccie from yesterday, I had to get to this mandatory pinch point which was only one bike wide, only to notice that a few people in front of me had sailed straight past the pinch point on the road, which we had been told in the race briefing that if we were caught doing this then you would be disqualified.  Heading back to transition at high speed downhill into T2 only to be met by three people dismounting very slowly on the mount line, but luckily on the left there was a grass run-off so I utilised that to my advantage & headed straight into transition for a much better T2 than T1.

I headed off onto the two lap 5K run (only to be told in transition after the race that the run was only 4.6K long!!).  The first 400mtrs was round the edge of the park & my legs didn’t feel that happy but once I got onto the top end of the park, things started to come together.  The run was a mixture of tarmac paths & grassy parkland (with a few stray dogs in between!!).  Onto lap 2, I felt that I was running a bit better now.  Yes, I was being overtaken by a few people but I didn’t know if they were on their first or second lap, because the course was very crowded as you can imagine with 900+ people on a single tracked path.  I crossed the line knowing that I couldn’t have done much more in that race, but the BIG question was would it be good enough to qualify for next year’s Europeans at Lisbon, Portugal?

My splits for this race are as follows:

Coaches Note – Graham did qualify so that adds to his impressive record.