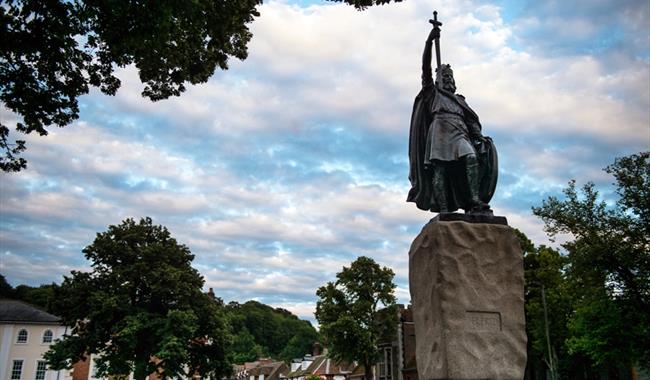 This event was very close to not happening due to one of the many Storms we’ve been having recently.  Anyway, the Race Organiser had to rejig the route a bit because of the height of the river near the finish area.

We arrived at Winchester at 7am due to the 8am start.  To start with, my warm up was a reccie of the rejigged finish area & then we headed off to the start, which was in the centre of Winchester, outside the Town Hall with King Alfred the Great watching the proceedings.

I started quite near the front, because with 2000+ athletes (the largest Winchester 10K ever), I knew I wouldn’t stay near the front for long & I just wanted to not get caught up in all the argie bargie going on behind me.  It had been advised that this was a newly designed course so I was a little bit unsure of the exact route, but once we got going most of it was the same.

Winchester 10K is always a difficult run because once you get to half way you join the main road with three big rollers and just to add to the hard work, it was into a gale force head wind so my times felt like they were getting slower. (I have been know to describe this course as fast & flat…) 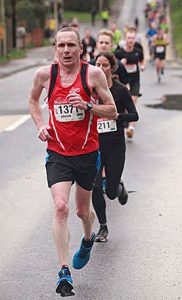 On the way to the finish it seemed a little bit strange because we had passed the right hand turn, which at the start of the race had a sign saying “To the Finish” but we ran past it & went further up the road & then turned right & headed towards the finish.  Alarm bells started to ring because about 400mtrs away from the finish, the lead car which had a time clock on top read 43(ish) minutes. Now I know that I am running slow, but not that slow.

So once I had eventually crossed the finish line & met up with Coach 2, we had a debrief & Coach 2 said that the first two runners were having a right go at the Race Organiser but she couldn’t quite hear what it was all about, but a couple of days later we found out that the course between 600 to a 1000mtrs too long. 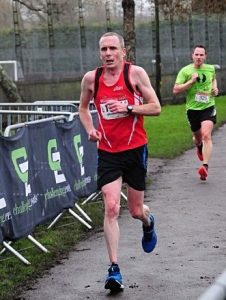 The quote from the Race Organiser was as follows:

We would like to re-iterate how sorry we are that the front runners were taken the wrong way, it appears to be down to human error and a miscommunication of how to resolve it. This appears to have affected the first 250-300 runners”

Anyway, that apart, as I had decided to run without my watch for this one, my results are as follows: