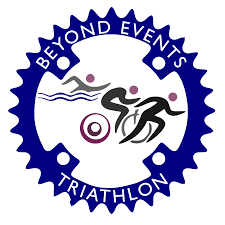 Another early start with a wake-up call at 4:30am for a trip to West Bay in Bridport, which was a rollover from last year due to poxy Covid.

Anyway, we arrived at West Bay in good time for registration at 7am only to be told that it was going to be at 7:30am (race pack said 7am), so we hunkered back down in the car because by now it was chucking it down & blowing a gale (summer sport at its best) but I eventually had to bite the bullet to register & rack the bike.  On the plus side, even though it was windy, the sea looked like a mill pond.

With transition all sorted, I managed to get in the sea for a pre-swim warm up, but the sea is still too cold for me which is why I always like to get a few minutes in before the start of the race to warm up (so to speak).

Everyone had massed on the beach for the swim briefing, only to be told that it had been shortened to a 400mtr swim instead of 1500mtrs because the water safety crew said that the current was too strong further out to risk the safety of the weaker swimmers (damn – I was looking forward to the long swim ) but the swim went OK & I managed to stay out of trouble, although it did seem like a long 400mtr swim to me though.

Out of the sea & into T1 where I decided to put my Synergie jacket on to keep dry & warm during the 48K bike ride. 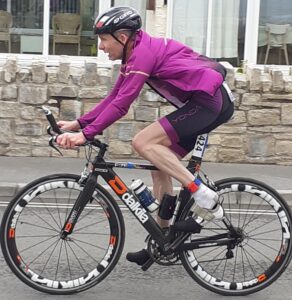 Unusually I had to ride this course blind so I left transition, headed out of town & onto a country road which was just wide enough for a car & a bike.  The roads were still soaking wet & filthy due to all the farm traffic.  The first shock on this bike course was a 14% climb, where I had to get the lowest gear out to tackle this one.  I eventually managed to get into a group of four (all non-drafting & socially distanced).  The rest of the bike course was very hilly with three more good quality climbs, a little bit of fast road (but not a lot) however, coming back towards West Bay I had a little bit of an incident where a car pulled out from the right hand side & hadn’t noticed us coming towards him, so I had to pull left to avoid him & this then caused me to swing right into a small gutter which I bunny hopped out of & then back onto the road.  My heartrate was by now a little bit higher than normal.

I headed back into West Bay for T2 & onto the 8K run, where yet again I didn’t know the run course but it started off quite well.

Anyway, I left West Bay, through a caravan park, through a field, onto a road where it now started to get interesting.  I was confronted with a big long climb with one of the guys who started with me at the start of the run, walking, which didn’t bode well, but I managed to semi run up it.  Then we had a flat bit before we started climbing again which seemed to be a bit relentless.  Finally we reached the top where we turned left into a skanky horrible old field.  The reason it is skanky & horrible is because I went over on my foot twice which didn’t help for the rest of the run, which included more climbing & the final steep stony descent into West Bay, which we then had to do an extra loop of the village to make up the 8K but once I was on solid ground I felt more comfortable.  The only annoying thing was that all the gains I had made at the back end of the bike & the beginning of the run, I had lost. 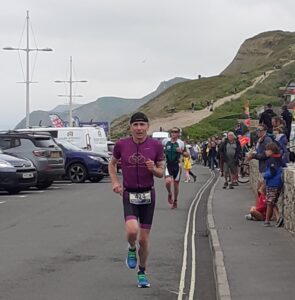