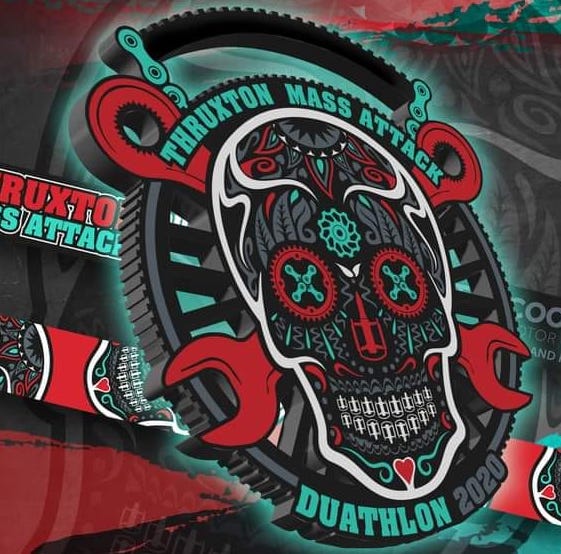 Not such an early start today as I was due to start at 12:15pm.  So we had a relaxing morning before heading off to Thruxton.  However, it got a bit more stressful as we approached the Thruxton Circuit because due to Storm Alex, one of the main roads to the Circuit was flooded so we had to find a diversion which was down narrow lanes, which were also slightly covered in water, but we eventually we got to the Circuit, registered then went to transition.

I must also add that it was still raining, quite heavily in parts, as well as blowing a gale.  This is a course where you don’t want it to be windy or rainy as it is an open Circuit/airfield.

As the racking wasn’t numbered you could rack wherever you liked so I decided to rack by one of the pit garages which had a slight overhang so decided to put my helmet & kit under the overhang to keep dry(ish).

The start was staggered, going off every 15secs.  The first run was three laps of the Circuit in 11.37K.  I didn’t go too mad & had a tailwind for the first part of the Circuit, but the last bit up the long drag it was blowing an absolute gale in your face (not good).  This was done in approximately 17:55, 18:12 & 19:21 (including T1).  Oh, & on the second lap, I thought I was going quite well but then someone said hello Graham & came flying past me & it was Toby Hood (now there’s a name from the past).  He was flying so hasn’t lost any of his speed over the years.

I left my shoes underneath my little overhang to hopefully keep semi dry for the second run, then headed off onto the 10 lap, 37.93K bike ride. 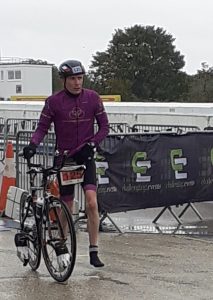 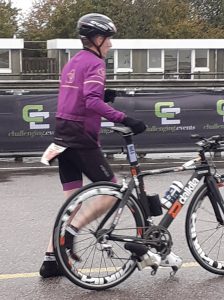 I then headed off again on the final one lap, 3.79K run.  It took a bit of time to get going i.e. as I couldn’t feel my feet.  As I was climbing the headwind hill & blowing out of my arse & really struggling, a young girl came past me & said “can you pass my best wishes onto Scott & Di” (& I’m thinking that “if you want an answer then you will be waiting a long time”).  After we reached the finish line she said that she was Sylvia from Italy.

I eventually got to the finish line cold & wet but pleased with the way that things went, but then when I was collecting my bike one of the Challenging Events Marshalls came up to me & told me not to have a split transition but I did point out that I wasn’t the only one & his response was that he has spoken to them as well.  I didn’t say anything else to him as I was too cold & wanted to get back to the car to warm up.

PS:  Coach 2 did attempt to watch the race, but it was so wet & windy that in the time that it took me to do two laps & exit T2 she was getting soaked through, so retired to the car for the rest of the race.  However, I really do appreciate her coming out with me on such a crap day.

Overall time was 2:25:28; Overall position was 32nd (no age group position at this time)