Not sure who the main attractions are…but could Graham battle it out with the Thorpe Park equivalent  of Dumbo, Goofy & Pluto for a place on the podium…

I decided to do this one as it sounded a bit different in that it was racing around an theme park.  We travelled up on the Saturday as it was such an early start on the Sunday.  So Saturday afternoon we did a reccie of the bike course.  The first part of the bike course was out & back & flat but the rest of it was a little bit lumpy & we then spent the rest of Saturday sitting on our balcony overlooking the Thames & watching all the rich people on their boats go past our accommodation. 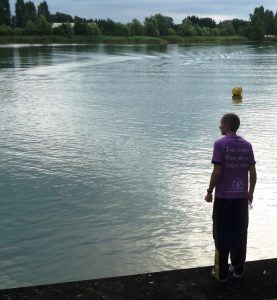 Sunday morning was a very early start i.e. 4am & arrived at Thorpe Park may be a little bit early as we were one of the first few people in the car park, but at least that gave us plenty of time to walk to registration & get set up in transition.  I went for a little run & looked at the first part of the bike route out of the park as that was the only that I hadn’t reccied & then the last part of the bike course back into T2.  I then ran the first 500-600mtrs of the run course.

My wave was the 5th one, starting at 8:40am.  This was a one lap course in Thorpe Park lake & everything seemed to be OK with the swim with no untoward problems apart from a few areas with the weed when you pulled through.

I went through T1 rather swiftly, looking at the times, so I was pleased with that & then out onto the bike course.  I overtook quite a few people on the out & back flat bit but I think that they were from the previous wave.  On the bike course we had to navigate a set of traffic lights twice.  The first time I did a Cavendish like sprint to get through them but on the way back I did get stopped by them but they had set up timing mats to take the stopped time off of your bike time.  The bike ride was a little bit lonely as there was not a lot of people to race so I just got on with the job in hand.

Into T2 & then onto the three lap run around the Park.  It was still rather cloudy but getting very warm.  By this time the run course was very busy & had plenty of people to overtake.  It was quite funky on the run course, running through the rides area with upside down ambulances & burnt out fire engines etc.  The last lap of the run was now  opening time for the park so we were getting very strange looks from normal seeing sweaty men & women running around Thorpe Park in lycra.  Yes, it was not the quickest of runs but I felt that I was running OK.  It seems to be the way that my running is at the moment.