Another early alarm call, i.e. 4am.  Not too far to travel for this one as the race was based at Boscombe Pier.

We arrived on site at about 5:30am & the sea was pan flat with hardly any wind.  Registration was done before the masses arrived so I was able to pick a good spot in transition & had time do a little warm up run before putting my wetsuit on to do a quick acclimatisation swim before race start, which was a rolling start with kick off at 6:45am.

The only strange thing about this race was that we didn’t have timing chips around our ankles.  The chip was on our wrists which was dipped into a dobber!!! at every  timing point, i.e. into the swim & then exiting the swim, then into Transition & then out of transition etc, etc, etc.

Anyway, the two lap 750mtr swim went well with no untoward problems so I exited the swim & into T1 which went OK too. 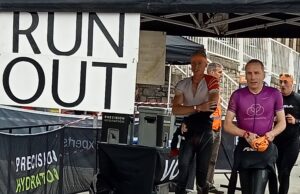 I headed out of T1 but had to slow down before the mount line as I had to dib the dobber, but then headed off onto the 20K, two lap bike course. 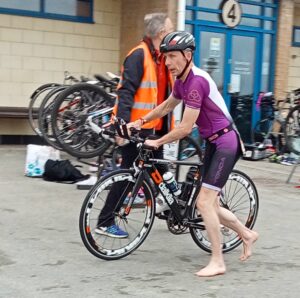 We had the big climb straight out of transition, which took us up onto the Southbourne Overcliff & headed off in the direction of Hengistbury. 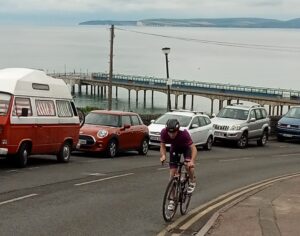 It was quite a quick ride towards Hengistbury because of the gradual descent, but what goes down must come back up.  Out on the second lap a couple of quick guys overtook me on the way back to Hestigsbury & I worked really hard to try to stay with them, which I succeeded on my way back to T2.

Yet again, I dibbed my chip into the dobber & had a fairly quick(ish) transition however before heading off onto the run I had to dib my chip again before I could really get going out on the 5K, two lap run along the promenade to Southbourne. 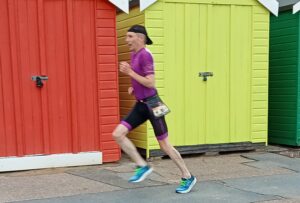 This is weakest discipline out of the three at the moment so I took a bit of time to get going, maybe due to the final bit on the bike ride.  Anyway, it still annoyed me that I get overtaken by so many on the run, but that’s just me & my race mind working overtime which I put it down to getting old (poor old thing), but overall it was not a bad run. Slow, but that’s the best I could manage on the day.