Coach 2 signed me up for this one as Arundal had been pulled earlier in the year (possibly because it had “Beer” in the title !!!!!).  So I decided that it would be good to have a play with the runners, but just to make it a bit more difficult for myself I decided to ride out to the race course & do a reccie of the route, which resulted in a 1:45hr bike ride where I decided that this was not going to be a quick run course as stated in the race info.

The race started with a lap round the cricket pitch, then straight into a 3/4 mile climb, a short descent & then we were back climbing again.  I just had to ease off a little bit because I committed too fast at the beginning (for me anyway). 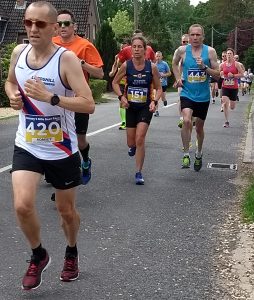 I eventually settled into a good group & it felt like slow-motion going past the finish line which was actually the 3 mile marker due to a gradual climb.

I headed off onto the second lap & started to feel a little bit better with a lap round the sports field to finish.

PS:  Coach 2 declined the beer as it was way too early in the morning to start drinking alcohol, so we both had cake instead 🙂