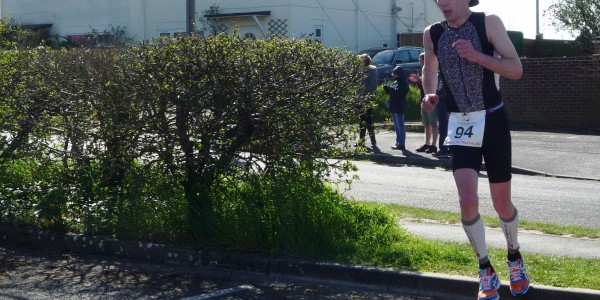 This was going to be my first proper test at the iconic Ringwood Tri (not so iconic now!!!) as it was over race distance on the bike (28 miles not 25) and a 9K run – would everything go OK??

We had quite an early get up time (5am) as registration was only open for an hour (6-7am) with transition closing at 7:15am.  As we drove through the forest to get to Ringwood the car temperature said -1 deg C (brrrrrrr – so much for this being a summer sport!!).  So the decision was made to overdress for this race.  Registration & transition was all done & dusted by 7am so we went upstairs & found a comfy sofa & watched the World go by until my swim briefing at 8:10am for an 8:25am start time.

Ringwood is a pool based event – 600mtr swim (24 lengths).  I was put in the lane furthest away from Swim Out & was 1st off in my lane with a female & male behind me.  So off I went only to get chicked within the first 50mtrs (what’s that all about!!) then within 100mtrs the bloke overtook me as well, but that was OK as he held quite a good pace so I could sit nicely on his feet & have an easyish ride (Scott & Di – the last training day tips came in handy!!).

Out of the pool & into transition where the decision had been made to put socks, jersey & gloves on.  At this point, let’s call him Mr Army & being hardcore, had just taken his bike off the rack & headed out.  So I had a quick chase through transition to catch him up & headed off on the bike, where Coach 2 told me I was 2nd out of the wave.  So whatever happened to the people in front of me in the swim – God knows because I had time for a cup of tea & some biscuits in transition (only joking!!). 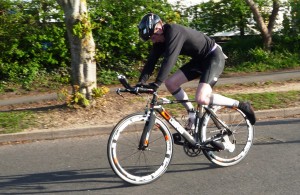 Now on to the bike ride, which was one lap, 28 miles, around the beautiful New Forest & all my training rides go round this course, I knew every corner, bump & gradient on it.  Mr Army was putting me into a lot of difficult places but I kept him in sight.  I managed to get the jump on him on the downhill to Burley where I managed to overtake him at 42mph, but that didn’t last long cos he soon got me back.

Then on the only major climb on the course, up to Boldrewood, he got away from me again.  But once over the top he was only probably about 400 meters or so in front of me which I managed to hold until about the last 3ish miles to T2 where, to my surprise, he started to come back to me.  So I upped the effort even more & within the last 1/2 mile I managed to catch & overtake him & my intention was to nail it into T2 so that I could do my own thing & not to be influenced by him.

Into T2 for a not too bad transition as I only had to take my jersey off.  I headed out onto the 9K run, one loop, & to my surprise Mr Army wasn’t with me.  It wasn’t until about a mile into the run where he caught & overtook me & I had no chance of keeping hold of him, so I just concentrated on my own running & what helped was that there were quite a few runners on the course from the earlier waves that I managed to pick off throughout the run.  I got overtaken by one other person nearing the end of the run but overall, not one of my quickest runs but I had a good day at the office (so to speak).