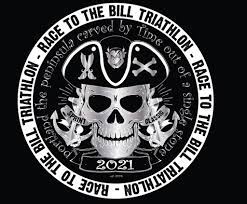 Race to the Bill Triathlon

It seems like a long time ago but I have finally managed to do a triathlon.

Something we now have to put on our race checklist is a face mask 😊.

Today’s race was in fact two triathlons with the first being the Classic distance followed by the Sprint distance.  Admittedly my race wasn’t due to start until 8am but due to Covid a lot of things have changed – NHS Track & Trace, face masks in all areas of transition, social distancing etc, but I managed to rack my bike, having remembered how to do it after all these months of non-racing.

The first race kicked off at 7am, so while they were swimming we were housed in the transition area where we had to wait until the last swimmer had exited T1 & then we could enter the water for a 750mtr swim.  I managed to get a small warm up which was not very warm with the water only being at 13oC, but when I got out I headed back to our waiting area on the slipway.  The swim was started in rows of three, so where I had gotten out of the warm up swim last, I was right at the back of the queue, but not to worry.  Hopefully I could overtake a few people.

On entering the water at the start I did a few strokes but had to stop because I couldn’t breathe properly but I resettled myself & off I went.  I got myself into a good rhythm & as predicted I started to overtake swimmers but the water got very cold when we left the harbour & entered the main part of the sea though.

T1 didn’t go too badly after not having done one for a long time & then I headed out onto the 11 mile out & back ride to Portland Bill.  This is simply described as “climb the big hill out of Portland, turn right & head all the way down to Portland Bill, turn round & come back the same way you went out”.  My only concern on doing a reccie the week before was the descent back into Portland where we were not allowed to overtake or undertake cars, bikes or anything else.  On the return leg I had a bit of a battle with two other people so I knew that I had to be at the roundabout at the top of the hill first to make my own way down & not be controlled by anyone else.  This was accomplished but I did toast the legs a bit.  I had a good & safe descent down the hill but got held up at the roundabout but all in all it didn’t go too badly. 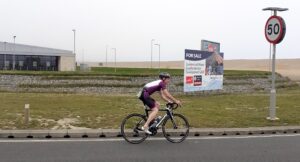 Into T2.  Not the best of transitions – new shoes that didn’t go on that smoothly, & then headed off onto the two lap 5K run (which was only really about 4.5K so someone told me afterwards).  I was quite pleased as the legs were moving quite well (well for me anyway).  Coach 2 was halfway round the run course shouting encouragement which was good.  I slowed a little bit on the 2nd lap towards the end, but otherwise it didn’t go too badly. 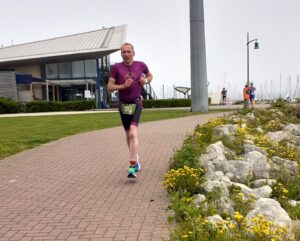 Overall, a few things to take into the next races but pleased to be back racing again

(While Gra was grabbing the top step at Race to the Bill, Mark was setting a PB at the Grafman 70.3)