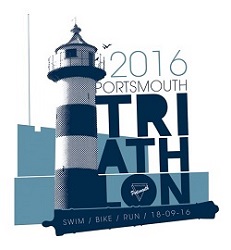 It sounds a bit strange to do a triathlon this way but the reason I did it was initially to race a friend of ours as he was always skirting around racing me, so when he said that he was going to do this one, I entered it without him knowing.  The only thing was that he ended up having an Achilles injury a few weeks ago so had to pull out.

Anyway, we had an early alarm call at 4:55am as we wanted to get there nice & early as the roads were being closed for the race (I’m getting used to this closed road racing i.e. London & then Brighton last weekend).  We arrived in plenty of time to register & get the bike racked & reccie the ins & outs as well as the last bit of the run.  I was in Wave 3 which was due to start at 8:30am but all of the waves had been delayed so I started my race at 8:45am.  They advised us that the current was pulling right to left as you look out to the sea but I managed to get a quick warm-up swim & I didn’t think that it was that bad (oh, how I was wrong).  I started in line with the first buoy & I thought that I was heading in a straight line towards it but Coach 2 has photo evidence showing differently.  I went out quite hard on the swim & managed to hold it throughout – well I thought so anyway.   Like Brighton, this was another stony beach & this time I exited looking like a cat on a hot tin roof!!!

We had quite a long transition run from swim to T1.  I got on the bike for a 4 lap 15 & a bit miles bike ride.  I decided to bring my road bike to this race as the Race Information Pack mentioned that it was a technical course with a couple of sharp U-turns & many left / right turns, but it wasn’t that bad so I could’ve gotten away with the TT bike.  There were plenty of people on the course as there was also 2 Olympic Distance waves in front of me as well as one more Sprint wave after mine.  I enjoyed the bike course.

I entered T2 & headed out onto the 2 lap run course which headed along the Esplanade & back along the promenade which had a few small undulations.  I didn’t seem to be running too badly but the final sting in the tail was that they took us up over the ramparts & then back down towards the finishing shute. 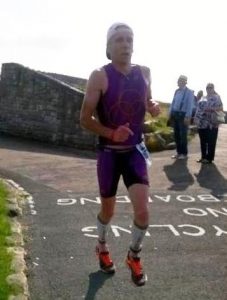 It was a very well organised race & we had a good day out in the late summer sunshine.

Overall position – 8th & 1st in my age group (50-54) [but then the most pleasing thing was that I also won the Super Vet prize & got bling for my efforts.