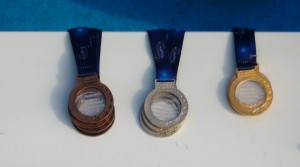 Having spent most of June chasing 2013 World Triathlon Championships qualification, the month of July was full of training, which was OK but nothing special, but during the month of August, everything started to come together with training.

Coach 2 viewed my data & figures & decided that I needed to race so the race I chose was the Reading Sprint Tri, which was quite a good choice because it was the 30th Anniversary of the very first triathlon ever held in the UK.

I arrived at the location quite early but due to logistical problems never got to reccy the bike course so I had to run with it blind (so to speak).  Also, there was a 20min walk from the car park to transition, which was based in the hotel’s tennis court.  I got everything set up in plenty of time as my wave wasn’t due to start until 9:10am.  The late start was due to the Olympic race starting before the sprint.  The swim course was a single loop of the hotel’s lake, so I entered the water feeling good & the swim went very well.  The water temperature was a bath-like 20.2 degrees.

I then entered T1, which was very uncomfortable underfoot, & headed out onto the bike course, which proved to very eventful.  A couple of miles into the course I had a Police car (siren sounding) behind me which made me think that I was maybe going too fast!!!  He eventually managed to overtake the cars & cyclists around me & then about half way through the bike course I found out where the Police car was heading.  Along one of the country lanes, one or possibly two cyclists had managed to put it into the front of a car on one of the tight corners.  Once I had gotten past the accident, a bit further up the lane the Police were making the cars do three point turns which made a group of four of us take our feet out and stop while they did this.  Also, on the only good descent of the course, I managed to get stuck behind a car who didn’t want to overtake the cyclist in front, so that slowed me down a bit as well.  Apart from those issues, the bike ride was good.

Into T2 where I had a bit of a problem inserting sweating feet into my running shoes.  The run was a three lap course around the lake and hotel surrounds, all off road.  The first lap of the run was a little bit congested because all the sprint waves, apart from one, were now on the run course, which was only about 5mtrs wide, so I had to do a lot of snake-like movements whilst I overtook the runners.  The second lap was a little bit easier, but starting the third lap I thought “where has everyone come from” as it was even worse than the first lap!!  But I managed to do plenty of dodging & weaving & got to the finish line without twisting any ankles.

I am very happy about this but had to go back to the printout machine 3 times altogether because I could not believe I came 2nd in the race.  My prize was a lovely plaque plus a rucksack.  Now onto two weeks of good solid training with a week’s taper running into another A race.

Whilst Graham had temporarily given re-set his goals from World to UK dominance, Dave Pratten decided to take on Europe at the Challenge Vichy iron-distance race that was doubling as the European Long Course Championships.

Still waiting for Dave’s “official” report but the British Triathlon website shows that Dave took silver at the European Championships.

Here is Dave’s take on the race-

‘So there I am shaving my right leg in the bathroom of a seedy French hotel while the confused blonde lay on the bed totally dismayed. I contemplated whether such behaviour was dignified for a pensioner and didn’t arrive at a firm conclusion apart from the fact that triathlon lands you in some very odd situations!!
To explain it was the night before the race and I was preparing my leg to attach my race number tattoo while my long suffering wife Sally offered words of advice, some of which were useful.
The following morning in almost complete darkness I entered Lac d’Allier for the start of Challenge Vichy.  This was a race start with a difference in that the pros lined up 10m in front of the main field which was constricted into a well defined lane of buoys. This made navigation simple but significantly contributed to what was to be an eventful swim.
My usual race tactic is to start hard, find some clear water and settle down into a relaxed rhythm for the 3.8k.  This time it didn’t work and I found myself literally battling my way around the entire two lap swims. I ended up using a number of tactics that I haven’t used since giving up water polo thirty odd years ago. Fortunately they still work and the swim was quick enough.
Transition was smooth in a brilliantly organised and marshalled transition zone and I was soon out on the bike for a 6 hour jaunt around the French countryside.  The bike again was well marshalled and signposted, undulating but not extreme.  The most significant challenge coming from an increasing northerly wind which made the later stages hard and slow( certainly for me).
The run was almost pan flat along the river promenade and local park. It was interrupted by flights of steps at various stages which reminded each of us that we had already completed a 180k bike. For three of the 4 laps I was going OK and then not unusually I got that feeling of nausea which reduced the run to a shuffle walk shuffle. I knew by this stage I was in second place in my category but not close enough or in any sort of state to catch my leading rival. As I entered the finish zone I stopped to kiss a very anxious Sally before crossing the line only 20 seconds ahead of the third placed Russian. ( I made a note for the future about not lingering too long over finish straight kisses/embraces).
I was delighted to pick up the second European medal of my career. Of course a gold would have been nice but even if I hadn’t ‘crashed and burned’ on the run I wouldn’t have beaten the winner.
I will now reflect on the season before deciding on next steps which are likely to involve more coaching and less competing so that I can put something back into this great sport.