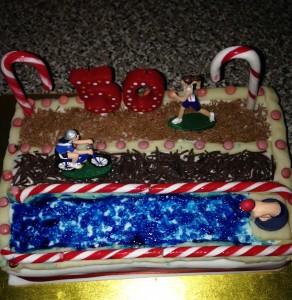 We travelled to Edinburgh having packed for the cold and frosty, possibly a snowy race day only to be surprised with gale force winds and relentless rain! And above freezing.

Lesson One : pack a waterproof jacket for the bike and run legs!

We had a look at the Commonwealth Pool the day before and the 50m pool looked inviting.  Luckily I now had my first glimpse of Arthurs Seat in day light and this large, no, very large lump of volcanic rock was dominating the skyline. However naively I decided that it must be a relatively flat course as there was no way they would put us to the top and back!

Lesson Two : read the course profile prior to entering!

Race day dawned and the weather was wet but not cold. The Commonwealth pool was buzzing with activity with the sponsor’s Haggis swaggering about. We racked the bikes as best as we could and tried to minimise the kit you would leave outdoors as we feared it may not be there on the way into T1 or T2. The bike hung precariously on the rack by its saddle with my helmet clipped to it for safety! My shoes were tucked into a plastic bag in the hope they may stay dry.

Back indoors… the race organiser allowed clothes to be left poolside so Scott blogged a spot close to the exit into the path leading to T1 which I used too.

The race started with each competitor starting individually in lane 1 with 10 second intervals before the next one jumped in. Each swimmer swam up one lane and then ducked under the lane rope and back down the next one until you had completed 8 lengths of the 50m pool. Scott started ahead of me so he got a huge cheer from me which possibly scared a few people stood by me.” Woo woo!” echoed around the pool quite well. due to great acoustics!

Scott was out of the pool and into transition before I started. My turn arrived with a bit of a surprise as I was expecting a countdown or Go! but I got a “you can go now” muttered at me! The pool temperature was cool and great for swimming in and the 50m did not appear to be too far and 8 lengths went by without any heroics.

T1 was a strange affair as I cannot remember ever wearing as much kit for the bike. So it was definitely slow but deliberate with bib shorts, long sleeved Synergie cycle top, hat and gloves being donned in readiness for the bike. Venturing outside into the elements was a shock as I think Edinburgh had all the wind for Scotland in one big burst!  My bike, at a slightly jaunty angle was still on the rack with my helmet. I collected the bike and managed a jog out of transition to the mount line where a very wet marshal invited me to get on.

The bike was 3 loops around Arthurs Seat in Holyrood Park. The course was well sign posted and the marshals were incredible with their smiling faces and words of encouragement as the weather beat them up! The course started with a slight downhill on a straight road to a roundabout which you entered the wrong way round. This was when I realised how strong the wind was as my bike and I nearly parted company and the roundabout kerb was too close for comfort. The course was then flat and straight and we pasted a gaggle of swans in the lake who appeared to be wind surfing.

Then I started the climb which I knew would be tough on my mountain bike but manageable with the gears available. Now the wind gathered its best performance and hit you in gusts from all angles blowing me all across the road and even trying to knock me off. I managed two thirds of the hill before having to get off and walk as I feared tasting tarmac if I persisted in riding. I hasten to add I was not alone. Even trying to push the bike was tough. And I got a free facial exfoliation!  Back on the bike part way up the hill to get to the top to be met with a great view of the city (apparently) as my attention was still firmly fixed on staying upright as now the wind was pushing all to a standstill. At this point I questioned completing the race as I had been frightened by the power of the wind and being dislodged off Arthurs Seat…but I knew there was no way Scott would sack the race so I decided to keep plodding on. I experimented with pedalling techniques to try and stay on two wheels and the next two laps were similar with the weather winning! So on lap two and three I had to walk to keep me sane and then laugh out loud at the ridiculous weather!

Into T2 and no calamities but trying to tie laces with thick cycling gloves on was stupid!

Lesson Four : remember to change your elastic laces to your running shoes!

The run was a slow but steady plod around the same course and I think my legs were working hard trying to stay in a straight line against the wind. A walk run combo eventually got me round and I was very happy to see Scott waiting for me at the finish line. It was not a dream … I really had done a triathlon!

So to conclude this was the toughest race I have done due to the weather but I am so happy that I have had the pleasure of sharing Arthurs Seat’s magical views and staying upright with proper Scottish weather!

A huge thank you to all the marshals and the race organiser for a memorable and spectacular event! Still chuckling now! 2015…bring it on!

So for my 40th we headed to Canada for some skiing, how could we top that…how about a triathlon in Scotland?

So we packed the car with our mountain bikes and headed North. I had booked a B&B within walking distance to the Commonwealth pool. We landed on the 30th and had a walk up to the pool and grabbed a bite to eat at the pub opposite.

Next day we had a walk into town in the cold, wet & wind and Di got her first chance to look at Arthur’s Seat and realised that it wasn’t flat…but still argued that the race briefing of “three times up & around Arthur’s Seat” didn’t really mean “up”.

Haven’t done Hogmanay & Hootenany before a race but the wind & rain were probably causing more noise than the fireworks!

Race day dawned and it was blowing a hoolie.

You can tell it was windy as competitors running shoes were getting blown across the transition area.

Novel swim with athletes getting dropped into the pool every 10 seconds or so and going up, under and along the lanes in the pool. Started T1 in the pool area but layering up before heading out into the storm.

Within the first 1km on the bike and I was soaked through, by the time I started on the first climb it was clear that this was going to be a race experience rather than a fast one. The climb from the bottom to the top of Arthur’s Seat had a plateau near to a lake/reservoir where there was a side wind that was just grabbing your front wheel and throwing athletes all over the road. On the second part of the climb you turned into a head wind that even in the grannie gear was stopping me in my tracks. The marshal at the top of the rock could stand at a 45° angle, leaning into the wind and be held up supported by the breeze!

At one point I thought I was been hit in the face with hailstones but realised it was the force of the wind making the raindrops sting my face.

On the three laps I saw about 3-4 cyclist with buckled & broken bikes.

Having lapped the rock three times on the bike I wasn’t looking forward to the run but knew that Di would be chasing hard behind me, so off I went.

Tried all sorts of tricks to get up & over the rock but had to stop to stretch up the cramping calves on a couple of occasions.

Got in and got my medal and have to say it is probably the hardest earned gong that I have.

It was definitely a race where you laughed your way around.

The race had the maximum 400 entrants with 327 finishing.

Helluva a way to start the year.