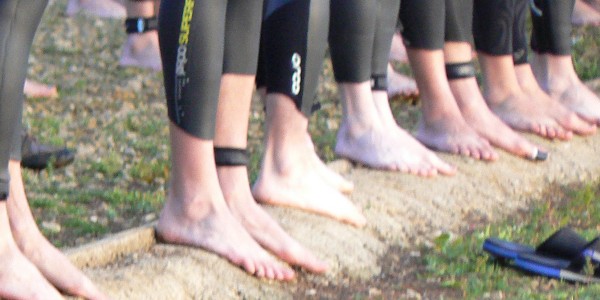 As part of his build up to a pretty crazy month’s worth of racing in June, Graham had a run out at a local race. Here’s how it went.

I thought my days of getting up at stupid o’clock had finished when I had retired from the IM distance, but this obviously was not the case!!

So at 3:30am (yes, you have read that right), the alarm went off for a departure from home at 4:30am. The main reason for being so early was that the swim started at 6:45 in the tidal river at Buckler’s Hard and if we had started any later, we would’ve all ended up at the Isle of Wight.

I treated this as a training race, just to make sure that everything was going to plan. There was no taper because I am in the middle of a big block of training for future races.

As for the race itself, which started with a 2 lap 1500m river swim, (12 deg C) this was the first time this season that I had dipped my toes into anything other than a swimming pool, so it was a bit of a shock to the system, & my ice cream head, which was saying to me “sod this, I’m getting out”, but I know what my Coach 2 would’ve said from the river bank!!!

Once the swim had started, I managed to position myself on the left-hand side of the river which didn’t seem that crowded, which worked well for me, however there was a little bit of a bun fight at the first turning but apart from that, I thought that the swim went very well.

I exited the river where we had approx 300m run up a steep grassed bank to T1. T1 was a little bit longer than usual because I had decided to put a long sleeved top on just to stay extra warm because I had more important races coming up & didn’t want to get cold out on the bike.

The bike course was a 2 lap loop which was a little bit short at 35K. During the first mile I started to overtake a few of the quicker swimmers but once into Beaulieu, I & another guy had found ourselves all alone.

At the end of lap one he managed to get away from me but I wasn’t going to allow this and on one of the climbs out of Beaulieu I put in an all out effort to catch him, which I did achieve & yet again we stayed together & worked well (I will point out here that we were within the legal limits & not riding a two-up).

Into T2. Just as I was dismounting, a guy came flying past me & got into T2 before & he was the only person who overtook me on the bike ride. This was not my quickest transition because I had more layers to take off than usual.

The run was long, at 11K, & this was also a two lap off-road loop on stony forest tracks which can only be described as a tough run course with a long hill towards the turnaround point & then when you return we had to run up the long grassy slope towards transition (the same one from the swim exit) & then repeat all over again.

At the start of the run, there was myself, matey that was with me for most of the bike & one lady & the guy that overtook me going into T2. One of the blokes & the lady started to get away from me but I stayed with the other chap until the first climb up to the turnaround point where I managed to drop him. In the meantime, the lady & the other bloke had managed to get away from me but I had them in my sights to chase down for the return to the turnaround point at the end of lap one. But annoyingly, they were not coming back.

So at the start of the second lap I had to get them. Eventually the lady came back about half way up to the turnaround point but the bloke caused me a lot of pain. Eventually, on the climb to the final turnaround point I got the little bugger & had to push hard on the downhill section to make sure that he stayed behind me. I did get overtaken by one person on the final stretch but managed to put in a final sprint up the last hill to the finish because a spectator had told me that I was being caught. However, he did not catch me.

Overall conclusion of this race, considering no taper, I coped with it quite well (well I think so anyway!!):