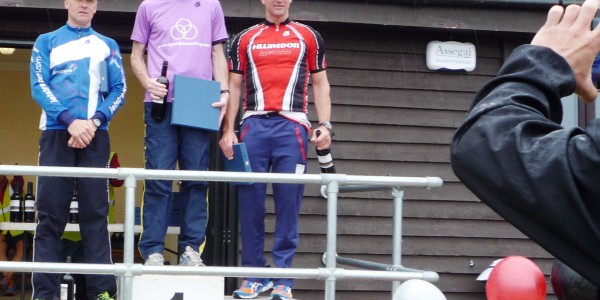 Usually the Big Cow events are held in Emberton Park but this race was being held for the first time at a new venue, Caldecotte Park, so I decided to go somewhere different, which made a change.

We arrived on Saturday afternoon & registered only to find out that there were 74 competitors in the Standard Distance race.  Usually with Big Cow events you get a much bigger turn out but due to all of the other races going on around the country it was only a small field, so you can only race those who turns up on the day.  We then headed off to reccie the bike course & luckily we found that the race organisers were putting the signs out, so we waited 20mins for them to get ahead of us so that we could get a much better idea of the bike course by following the signs.  One good thing about the bike course was the one mile, 12% climb that had to be done twice (ouch).  We then headed off to our B&B so that I could do my usually pre-race bike / run, i.e. 20min bike & a 10min run.

Race day morning dawned at 4:15am with light drizzle (maybe put the intermediate tyres on instead of riding on slicks – as though I would have time to change two tyres in the morning – I’ll stick with slicks!!!)  We arrived at the race venue third car into the car park so we arrived in plenty of time.  The only problem we have with this race venue is the duck & goose shit all over the transition area (yuck) as I’d have to run through all this muck twice (double yuck).

The race started in the lake prompt at 7am with a positively balmy temperature of 19 deg C water temperature.  The swim was a two lap affair & the only issue on the swim was when I reached the first yellow buoy, I like to cut it tight, but only to be stopped in my tracks because they had put a big blue drum which was hidden behind the buoy so had a little bit of pain to arm & head so I learnt from this & knew not to cut the other buoys so tight.

I exited the swim into T1 to be told by Coach 2 that I was in 6th position.  I didn’t think that I was swimming that well but I’ll take it though.  However, I managed to gain a place in transition as the lady at the mount line said that I was in 5th position.

Onto the two lap bike course & I could see in the distance on the first dual-carriageway stretch, two competitors.  Could I manage to get to them to get to third?  I managed to overtake one before we got to the bottom of the climb & then with my Contador-like climbing prowess I managed to get into third place.  How long could I hold onto this before the quick bikers started to chase me down.  Headed back to the Park to start lap two where Coach 2 shouted “you’re in 3rd but 4th & 5th are right behind you”.  Back onto the climb, still no-one caught me but then on one of the long flatter stretches one of the guys overtook me so I was back in 4th.  Then about a mile from the finish I got overtaken again so I was now in 5th (damn).

Onto the dismount for T2 where the bloke in 4th ran in his cycle shoes, I didn’t so I managed to overtake him & I was then back up to 4th.

I went to rack my bike & the guy opposite me who was in 3rd place when racking his bike was being told by the Race Referee to do his race helmet back up & he was also throwing his bike around so I just go on with what I was supposed to be doing & exited T2 with the second quickest transition time of the day.  This on a good day would’ve seen him being issued with a 2min penalty, but time would tell at the end of the race if this was going to happen.

Onto the two lap run around Caldecotte Lake in 3rd position where the man who was having a tantrum in T2 didn’t catch me until about 2K into the run so I was now back in 4th.  However, I managed to hold on to this guy for most of the first lap but it was putting me into difficulty.  I reached the end of lap one where Coach 2 was bellowing instructions & positions at me.  They were that 2nd & 3rd were just up the road & that if I was quick enough could get into 1st!!! However I couldn’t run any faster than I was doing but tried all the same.  Well I knew that Mr Tantrum guy wasn’t going to come back but Coach 2 was saying that bloke in 2nd was slowing dramatically.  I could see him in the distance but he just wasn’t coming back very quickly but with about 2K to go I did manage to catch him.  With a 10mtr short climb I committed & pushed on to try & break him.  I don’t do looking back so I didn’t know if I had broken him but I was now up to 3rd & on the podium, only to be overtaken by some whippersnapper in the last 500mtrs before the finish line.  I just couldn’t do anything about it so I managed to hang onto 4th place overall.  Very unexpected, but very happy.  Thank you Coach 2 for all of the advice & help on the run.

So I stood on top of the podium with a bottle of wine, an £80 voucher (to be spent on Big Cow events next year) & a big silver salver.