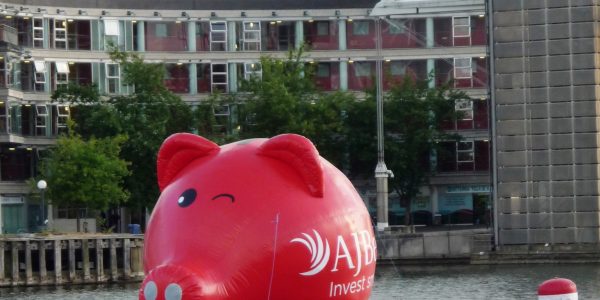 I have been doing triathlon since 1997 so 19 years on I have finally gotten around to ticking this one off of my bucket list.  We were supposed to have travelled up on Saturday but under closer inspection of the race details, found that where we were staying, in the Excel Premier Inn, the roads were going to be closed, so decided to travel up to London on Friday instead.  So Friday evening after dinner, we went for a walk to the Excel Centre, which was only about 3 minutes away to check things out & whilst doing this, we bumped into Harry Wiltshire while he was out on a run & stopped for a quick chat.  He did seem surprised that I was still wearing the Synergie colours & of course I confirmed that I was very much with the team.

Saturday – went to the Olympic Park & went up the ArcelorMittal Orbit (the giant red swirly thing as Gra calls it – Coach 2).  The day was very clear so the view across London was stunning.  After that we headed back to the Excel Centre & picked up my chip.  Went to the Helpdesk with a couple of questions then headed off to watch some of the races that were on at that time to get a feel of where things were & to put it all into perspective.  We then headed back to the hotel to watch the Men’s Olympic road race in the hotel bar.

Race day dawned as a very cloudy & extremely windy day but I have already been pre-warned about the weather by a very helpful & friendly draft buster who was positioned just outside our hotel so was totally prepared for a headwind heading towards Westminster & a very swift return thanks to a very handy tailwind.  TV makes things look so much bigger because when I arrived at transition, yes it was big, but not a big as I thought it would be.  I set everything up OK then off to sit with Coach 2 as I had a bout 45mins to kill before my swim wave.  My wave started at 8:55am & we were all called into a holding pen at about 8:40am for our race briefing, which as all a bit huggy & chummy for me (not my thing at all – I come here to race not for happy clappy stuff!!!).

I lowered myself in the Thames into what had been described as 20 deg water temperature, but I still struggled with the first initial head under the water.  There wasn’t not a lot of time or room to do a proper in the water warm up even though I had done all the warm ups before getting in.  I was in early enough though to get on the left hand side of the swim start & held onto a buoy.  I chose this side as it was out of the way from all of the hustle & bustle heading up to the first turning buoy.  Once we had started the swim I could see Coach 2 walking along the quayside.  I rounded the top end of the swim course & realised why that wasn’t too difficult because the return leg was into the fierce headwind which made it a little bit choppy & a much harder swim.

I exited the swim & took off my wetsuit which was put into a plastic bag then ran up a steep flight of stairs into the Centre with a monster run around the outside of transition to eventually get my bike & headed off onto the 2 lap bike course, but in my eyes it was one big loop & then one small loop.  As described earlier, it was quite a difficult ride to Westminster with the howling head wind but I managed to pick up some good speed on the way back, but there were some deceiving little bumps on the course which took the speed off a bit.  The second loop was half way back to Westminster again & then the return leg back to the Excel Centre with vocal support from Coach 2 twice (this is always a good thing as it keeps me going).

This time there was not such a big run from dismount line into transition.  Put the run shoes on & headed off to do the three lap run.  Yes the run is still not as fast as it should be, or used to be, but I am trying my best.  The good thing about the run was that I spent most of the time overtaking people.  Running out to the turnaround point was the easy part of the run but the return to the Excel Centre was very difficult as I was now running into the still very strong headwind.  I did get overtaken by a few people but it was always going to be difficult to judge whether they were in my wave or the previous wave.

Overall Conclusion:  This was a well organised event & I really enjoyed it.  So not much more to say really.