“You will absolutely love this race” I was told on several occasions by wife Ann, a Synergie Coaching athlete who had competed in the European’s qualifier at Leeds Castle last year.

As my first full race this year, I thought to myself “I have to give this a go”; after all who gets to swim in a moat?

Leeds Castle described by some as “the loveliest castle in the world”, is in Kent not Leeds in Yorks (some 230 miles’ away incidentally – useful to know when setting the Sat Nav to go there)

The owner of the castle in the early 13th century was Edward I also was known at the time as “Longshanks”. I considered having this name embroidered onto my trisuit in his memory but decided against it as it might have got me arrested!

Armed with a wetsuit, goggles and latex swim hat supplied by the organisers (which was so voluminous that I am considering turning it into to a hot air balloon) I steeled myself against the blistering early morning sun along with 100 other penguin-like creatures sweating profusely and wishing the start of the race would arrive quickly so we could cool down.

The swim was actually a beach start with everyone lined up in approximate swim time order. So those at the back were still entering the water when the super-speed guys were 20-30m into the swim.  I was bold and went middle-front position!  At the gun I suddenly found myself being jostled and trampled upon, swam over – OK maybe should have chosen right at the back instead!

“Keep left of the buoys” is the instruction we normally hear at the race briefing – sound familiar?

Not here – a T shaped course around the moat meant left at the first buoy, right at the second straight on at the third and er.. well probably left at the next…. Well, I just followed everyone else.  So, with the washing machine set to its highest level of turbulence I heaved and puffed my way around the splashathon, flailing my arms inanely eventually swimming under the castle, through the archway and pondered whether there were any skeletons of mediaeval soldiers or gold coins or other such riches just below me!  but then I came to a sudden halt as I came upon several breast-strokers from the previous wave.  At that pint I felt great!! I was actually quicker than another human being – hallelujah😊

Buoyed by this (pun intended) I saw a gap and powered through to left/right past several more buoys then exited the swim and sprinted jogged slowly to the T1.

As this was my first triathlon of a full ‘come-back’ year after 3 years of taking it a bit easier, I went hell for leather as I used to do in a race, on this undulating 26k bike out-and-back course along the A20.  Let’s just deviate slightly – the word “Undulating” is conjures up an image of ‘gentle’ or perhaps easily achievable with maybe a little effort on the pedals.  I thought Oh! come on, let’s have the truth now – I am much less fit than I used to be and these undulating (uphill) bits forced me to cycle in the lowest gear with everyone racing past me.  Then I thought in a moment of madness “well you never know I might actually get a medal!”     So, I choked on my own laughing and got on with the job in hand and rode hard to 8km, turned at the island and rode back hoping to get to T2 before the racking had been dismantled.  All said and done I enjoying the down bits; 30mph in places!

T2 arrived more quickly than I had expected – after riding through the castle estate and avoiding ducks and ducklings,  (Note for Di and Scott – these were real ducks not the plastic type sporting union jack and sundry hats and goggles etc.)  and attempting a bunny hop over  one of the small speed bumps; I won’t elaborate further on that.

Not the best part of the race – the Dismount – it was perfect – thanks for the tips Di and Scott all those years’ ago – I felt like a pro and sailed through T2.

The Run 5K – “just a little hill somewhere in the run” I was advised.

My motto for advice like this and indeed, life in general is “never believe anything that anybody tells you and only believe half of what you see and you will be well on the way to success”

The run started when the temperature had risen to a blistering, humid 31deg C without a hint of breeze. But with the words “just a little hill” in my head I thought “I can smash this.”  After a downhill start from T2 and a straight bit through the trees over a river I was feeling fresh and ready to do battle and then without warning someone had turned the world upside down! No, I hadn’t fallen nor had the gel kicked in.  For some strange reason everyone ahead of me appeared to be climbing – nigh-on vertically. “Had I encountered a climbing club” I thought? But no, I soon realised that the run – and I use the word loosely – suddenly became a scaling of mount Everest but in hot sunshine and people were walking up it. 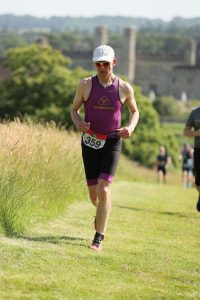 I decided, therefore, at that juncture,  that I too would walk up this almost vertical wall of grass,  partly because I didn’t want to look out of place and partly because my heart didn’t have the capacity to beat any harder than it was at the time.  It was a nice day for a walk anyway. So I chatted to other climbers until the hill levelled out then they ran off! Must be something I said. At the top I was told by a Marshall that it was “downhill from there”. (Just memorise those last few words).  After a quick look behind me to see if my wife Ann had caught up with me yet (She started 10 mins after me) I was satisfied that I could cruise down the hill to the finish with impunity. Until, that is, I reached approx. 4.5km and looked once again up the hill when to my horror I saw Ann behind bearing down on me perhaps some 2 minutes or so behind!  And we had a bet on.  With just 500m to go – including 300m up the final hill to the finish – I summoned the few remaining milliwatts of energy reserves in my body and increased pace from a laboured jog to a laboured slightly faster jog over the line to stay ahead of her and promptly collapsed like a sack of potatoes gasping for breath.

10 mins later on checking my time I was delighted to discover that my provisional (and, as it transpired, final) position was 3rd in my age group.  A triumph for me – and a bronze medal presented on a podium!! 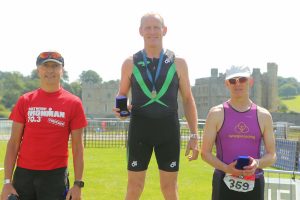 Interviews and chat show invitations via my agent please.

I am back with a vengeance – and finally yes I did love this race: –