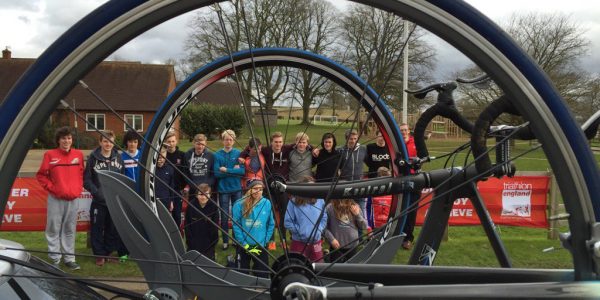 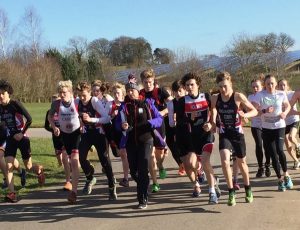 Di & I were hosting a Super Academies Camp for 27 athletes from four Regional Academies during February, but still had the usual Synergie Coaching training day as well.  Whilst we were getting all that arranged Gra was out & about doing this stuff:
On 7 February – Training Day.  Another great training day with Scott & Di.  This time we went to have a play in an Industrial Estate – it wasn’t as bad as it sounds!! We did some group riding which included practicing 180 turns in readiness for draft-legal, many lapped races.  This was followed by a gentle group ride up to Holt Common where we did hill repeats with 2 on the bike & then 1 run around a 1K(ish) loop.
On 13 February – Moors Valley Park Run which I did after my usual swim set at the Ringwood Recreation Centre.  This turned into a bit longer than a 5K run as the Marshall decided to send the front runners straight on at the turn around point.  Not to worry.  It was still a good run session after my swim.
On 14 February – spoke gate on 3hr ride.  2hrs 50mins into my bike ride I heard a big ping from my front wheel so immediately stopped to find out that I am putting so much power through the front wheel that I busted the spoke.  My final 10min ride home put quite a lot of resistance on the brake blocks.  This was then followed up with a 10min run.
On 21 February – I did the Winchester 10K.  It was a mild-ish morning so I decided to run in just a vest (I hasten to add that I did also have my shorts on).  Coach 2 had asked me what my predicted time would be & I said between 41:30 & 42mins.  This course is one of Scott’s famous quotes that the Winchester 10K is flat.  All I can say is that it is unforgiving & relentless, but it is still a good course.  I came in 65th overall in 41:51 & I was 3rd in my age group (average K’s were 4:12 & my splits were 1K = 3:58, 2K = 4:03, 3K = 4:01, 4K = 4:11, 5K = 4:06 [20:20], 6K = 4:21, 7K = 4:14, 8K = 4:26, 9K = 4:08, 10K = 4:20.  There were 618 competitors.
On 28 February – I didn’t do my normal bike / run scenario for a Sunday because after Thursday’s nightmare run, which turned into a 10min walk, I decided to do the run today to make sure my mind & body was OK.  And yes, my body & mind is fine as everything went very well.