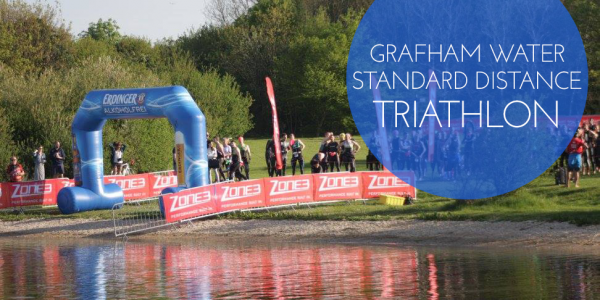 We were looking forward to going back to St Neots so that Nikki could remember the location because at last year’s race Coach 2 hadn’t realised that I had given her concussion, but 10 days before the race we had received an email saying that the parking area was water-logged & would never dry out before race day so the location of the race was now going to be at Grafham Water.
We arrived Saturday afternoon, after a very hot journey up.  I managed to blag an early registration & then went off to do my usual pre-race bike check plus 20min bike & 10min run.
Sunday morning arrived.  It was again very mild & the forecast was that it was going to another scorcher.  We arrived in plenty of time to set transition up & go for a pre-race warm up run with all of my normal drills before transition closed & the race briefing.
I was in the 4th & final wave for the 1500mtr, one lap swim.  They said that the water temperature was 14 degrees but it felt more like -14 degrees.  Luckily I managed to get in early enough to get my skinny body warmed up (not).  I had a cautious start as I didn’t want to go too mad because it was so cold.  As the swim went on, I managed to settle into it OK but it got a bit congested near the end of the swim because I was catching previous waves.
Into T1 with very cold fingers fumbling to get the Velcro strap undone on my wetsuit.
Out onto the 38K one lap which consisted of a two mile out & back which had quite a good downhill section where I managed to reach 38mph.  Although I did have a little bit of a clenching of the bum moment because as I was going downhill overtaking people, on the other side of the road it was chocker with athletes coming up it, in places 4 abreast (where are the draft-busters when you need them).  I then came back past transition where I heard a big shout of encouragement from Coach 2.  I was now out on to the bigger loop which was a biker’s dream – fairly flat, smooth roads.  The only issue with the going out & coming back was that there were problems with the cars not being able to overtake the cyclists, as there were competitors on both sides of the road which was causing a queue.  There was a lot of freewheeling, braking & Tour de France styli overtakes trying to get through the cars.
Into T2.  I hadn’t realised that my toes were that cold until I had a little bit of an issue trying to get them into my running shoes.  But once they were in & I was onto the run I didn’t think that it was that bad temperature-wise.  Only 26 deg C.  The one lap 10K run consisted of an out & back along the dam & then a bigger out & back after we had passed through transition.  The run went OK going out to the turnaround of the bigger loop but then things started to fall apart due to having not done any running for two weeks.  The little rucksack landed onto my back, which then turned into a bigger rucksack, & then it felt like there was a suitcase there.  I was then being overtaken by people who should not have been overtaking me.  I managed to stop the piano landing on my back & didn’t fall apart altogether.
My splits are as follows:
Swim – 25:31
T1 – 1:02
Bike – 1:01:21
T2 – 00:49
Run – 45:52
Time – 2:14:37
Overall position 151 (out of 526 finishers – but I did get chicked quite a few times (13 to be precise!!) & 19th in my Age Group.
Gra