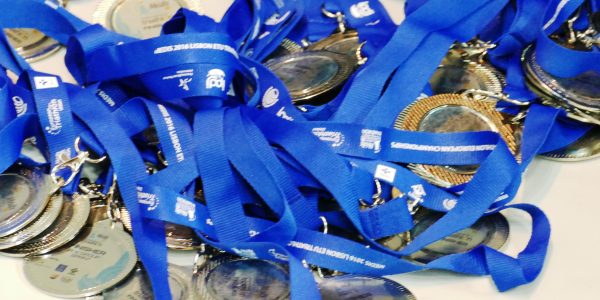 Graham was out, once more, representing GBR – this time at the European Championships. Lost count as to how many times he has qualified to represent Team GB…

We arrived in Lisbon late Tuesday night so all we did was go to bed.  Woke up Wednesday morning to look out of our bedroom window & find that we have a lovely scenic view of the estuary.  Bonus points there.  The rest of the day was spent reccie-ing the area, sorting out places to eat (very important thing for me to for anyone who knows me!!), shops etc.  Also, transition areas, swim start as well as collecting the bike from the overland transport people “Ship My Bike”.  There was no need to build it as it came over in one piece in the back of their lorry.  Thursday was a very, very busy day.  We had to register then do a bike reccie, which included 800 other competitors with the Police shutting down both sides of the dual carriageway & all of the competitors doing a Tour de France styli ride of the course.  Then we came back & did the GB race briefing followed by the swim reccie in the afternoon.  In the evening we took part in a rubbish Parade of Nations & a dodgy pasta party afterwards.

Friday was Race Day.  Transition was situated underneath a covered area between two buildings, right next to the swim area.  We met up with Scott & Di & had a little pre-race chat.  My wave was quite late in the morning, being an “old fart” now!!!  The swim didn’t quite go to plan because when we reached the exit of the swim it was up a small concrete ramp which was only a door-width wide & as I was mid-field in the swim it just caused a major bottle-neck & there was nothing I could do about it apart from wait my turn.

Into T1.  I had a good transition.  Onto the fully closed out & back bike route.  Before we got onto the main road we had to navigate a few speed bumps & some cobbles – not quite Paris Roubaix though.  Once out on the main road I managed to hold 30 plus mph all the way out to the turn.  It wasn’t me feeling extra strong, it was because we had a howling tail wind & looking at the people on the way back, I knew that it was going to be a struggle.  Up to the turnaround point, which included the only climb on the course, we were now struggling between 12 & 16mph.  Not good.  But I was still managing to overtake a few people.

Into T2 & then out onto the 2 lap run which included something I have never experienced before in triathlon, which was going through the indoor Arena which usually hosts music festivals.  It was all blue carpeted & made me feel like an elite triathlete (shame I wasn’t running like an elite triathlete!!).  It was quite a narrow course so I had to be a bit careful with the overtaking situations but I felt like I was going quite well.  I came into the stadium for the finish with a German in front of me & I had to beat him so I put in a monster sprint with the vocal support from Scott & Di & Coach 2 & I managed to hold him off but I have to admit that I was in a bit of a mess after the finish, but I have to say that this was a great experience.