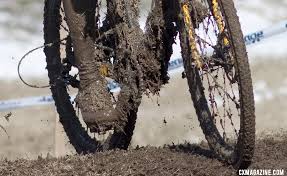 Graham went out to get down & dirty.
After having done one of these races last year I was looking forward to getting back to playing in the mud & after all the rain we’ve had, it was going to be very muddy.
After signing on & numbering the bike up for the race, I went off to view the rock garden which had been extensively developed since my last visit, so I had a couple of trial runs down it.  As for the start of the race, the organiser described it as a rolling start at a moderate speed but by the time we had reached the bottom of the road section over six sleeping policemen, the speed had reached over 30mph (so much for moderate speed).
It is a 3 lap course, 5 miles each lap & very technical.  I can also confirm that it was very muddy & wet.  Lap 1 was OK because I was with a few people but by lap 2 it got a little bit lonely.  However, by lap 3 I was starting to catch & overtake a few people who had probably gone off a bit too quick.  As for the course itself, it had now been cut up very badly with lots of tree roots now showing & instead of the bike going forward, it spent most of the time going from side to side.  So I had to a lot of Rossi like leg movements to keep upright.  But overall, one & a half hours of a very good workout & also so much concentration needed.  Most of all, it was so much fun.  Love it.  The bonus at the end of the race of course was a cup of steaming hot tea (sweet for me – 3 sugars!!!) & a lovely bit of homemade cake (yum).
The only negative point was it took me two hours to clean the bike.
Total time – 1:36:05 – 18th senior out of 43.
Lap times:
(1) 30:50
(2) 32:39
(3) 32:35