There were two reasons for going back to this event.

The first was I wanted to get the second half of the medal after I did the duathlon in October 2018 & the second was to take Coach 2 around the house & grounds because the weather was really crappy last time we were there.  Also, two weeks before the event I received an email from the organisers saying that the race had been selected to host the South West Regional Sprint Championships.

Sunday was 10% cooler than it had been on the Saturday & I wasn’t in the lake until 1:30pm, so we had a leisurely start to the day & arrived in plenty of time so myself & Coach 2 had a pre-warm-up stroll around the grounds.

Transition was set up in plenty of time & then we walked down to the lake for a 750mtr one lap swim. 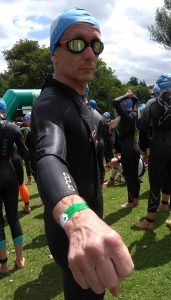 I had no major issues with the swim this time & I felt good.  The only slight issue I had was at the start when I was heading towards the first buoy, some guy decided to swim over my head towards the bank & knocked one side of my goggles making them loose.  I had to have a quick stop to readjust them & then headed off again.

Out of the swim for a 400mtr run up a grassy hill to transition.  I decided to take my wetsuit off at the bottom of the hill & carried it up.

Into T1 & then headed off onto the seven lap, 21K bike ride.

Seven laps done & into T2.  I made a slight mistake though.  I overshot my racking spot which wasted a few seconds because it was quite windy & my bright green run shoe laces had now been covered up by my neighbour’s towel which had blown over my shoes.  So I made a quick about turn, shoes on & headed of onto the two lap 5K run.  A quick description of the run course – down hill from transition, passed the waterfall, through a tunnel, round the Doric Temple, then onto a nasty double roller-coaster & then a final nasty climb up to the finish. 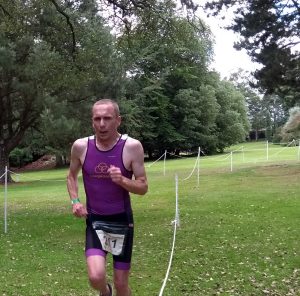 As I left transition, Coach 2 said to me was what I thought was 35secs to someone who I wanted to beat (what she actually said was 3+ minutes!!!).  When I left transition I overtook one guy who I knew I’d raced at Moyles Court triathlon but I never saw him again so was pleased with that.  I worked hard throughout the run as I wanted to stay ahead of the guy I wanted to beat.  Also, it was helpful to have competitors from previous waves to keep catching & trying to overtake.

Two laps done – that did hurt. 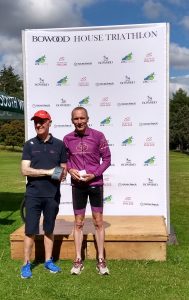 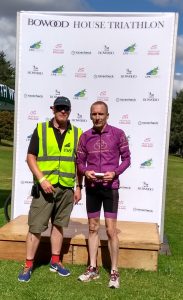