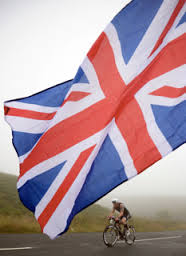 Graham was after another GBR vest.

This would be my second A Race of the season.

The reason being, it was a qualifying race for the Europeans in Geneva next year.

We drove up to Bala on the Saturday morning (5 hours) & arrived lunch-time(ish) & had some pasta for lunch.  I went to register & then myself & Coach 2 went & drove the bike course as I had never done this course before.  Everyone was saying that the standard distance triathlon bike course at Bala was a very quick course, but driving it in the car it had some good quality long climbs, but mostly undulating so I began to like this course even more.  Also, we noted that the run course was the same direction as the bike course (both out & back) so we got to view of that as well.  Once we had returned to Bala it was onto the bike to do my normal pre-race checks which meant I did 1/2 hour on the bike & then a 10min run.

Race day morning was very misty.  We were staying in a lovely B&B owned by the people that own the watersports company at Bala lake.  Mark described the lake as being covered with pea-soup fog which was a bit of a worry, but hopefully with the late(ish) start (9:30am) it may clear.  Mark, by the way, is the water-safety guy during the race.  By the time we’d had breakfast & then driven to the lake, the mist was slowly clearing.  I did all of my pre-race checks in transition & was set up in plenty of time.  The race briefing was at 9am & my wave started at 9:50am, so found Coach 2 by the swim start area & went through my warm-up routine.  By this time the sun had started to come out & the lake was looking clear (& flat as a pancake), so ready to race.

We are able to get into the lake a few minutes before the start time & they said that it was 17 deg; (I think they were lying as it was a wee bit on the chilly side, but I am a bit of a wimp!!).  The swim was a one lap 1500m rectangle & had no untoward problems, but it did get a bit busy towards the end where I’d caught the back-markers of the previous waves in front of me.  The only issue with the Bala swim is the getting out of the lake because it is very shallow, so you can’t swim all the way up to the jetty & you have to walk on the rocks/stones before finding the matting on the ramp to the jetty.

Into T1 for what I thought was quite a good change.  Onto the bike for the one lap (non-drafting) out & back 39K closed road circuit (I clocked it at 23 1/2 miles on my computer).  The first three, four miles were a little bit busy with everyone jostling for position while catching some of the previous waves as well on the bike, but towards the turn-around point I had sight of about 4 others in front of me who seemed to be working well together, so if possible I needed to get as close to them as legally permitted, & after the turn-around point it was about a 3 mile climb.  At this point I remembered that in the car it looked a lot worse than it actually was because I managed to stay in the big ring in the aero position & just spin the whole climb.  By this time it was just me with the one remaining competitor from the group a little bit in front.  The only worrying thing on the return leg was I nearly over-cooked one of the corners & almost did a Nairo Quintana tumble, but once the heart-rate had settled it was all good back to transition.

Heading into T2, which wasn’t quite as smooth as usual due to another competitor trying to take his feet out & having a massive wobble right in front of me, but I managed to avoid that situation & arrived at transition in one piece, which wasn’t so quick this time because I had problems getting my right shoe because my foot was so cold.

Out onto the run, which I can only describe as follows:  the first 2K rolling & then 3K downhill into a campsite turn-around & return.  This is where I knew everyone would be chasing / overtaking me, so I knew that this part was going to be the most competitive / hardest part of the race.

Within the first K two people had already overtaken me but I just concentrated on my own running.  My plan was to obviously run the best I could but not overdo it on the outward stretch because I knew the hill coming back would need to be respected.  I headed into the campsite & at the turn-around point I turned my number from facing front to the left hand side so that none of my age group competitors could see the number or the I / J (i.e age group identification).  Leaving the campsite I concentrated on getting a drink & didn’t notice the little speed bump & had a mini trip – nothing to worry about though so no damage done.  I then headed out onto the return leg & this is where I knew I had to commit everything & slowly the two female runners & one bloke gradually started to come back to me.  It was a very slow process but I was pleased with the way I was still running.  I caught & overtook them & then continued to catch other people, but most pleasing was that no-one overtook me until the final 400mtrs when the run course returned to the lake & we ran around the transition field & a rough car park area to the finish where one of the ladies came flying past me (damn).  I just managed to hang onto her, but couldn’t out-sprint her.

Now for the confusing part:

As the race was a qualifier for next year I was racing in the 45-49 age group but was registered in the 50-54 age group for Geneva, so I had to work out where I came in that age group scenario.  So myself & Coach 2 spent a good hour on Sunday night checking the 45-49 age group where I came 11th & then checked off all of the 10 competitors above me to see if they also were going up an age group (Wrexham Tri are brilliant in that they identified who was I / J on the entry list which helped a great deal).  So once we’d cross-checked this, we found that only two of the 10 were also going up, so that put me 5th in the 50-54 age group.  We then checked the four above me on the BTF website to see if they’d registered – they had (damn), however, one of the four had already qualified at Liverpool which made me Qualifier No. 4.  By this time we hoped we’d got our maths right & have been checking the BTF website daily (& in some cases more than once a day)

So I am now pleased to announce that….YES, YES, YES – myself & Coach 2 are jetting off to Geneva next July for the 2015 European Championships.