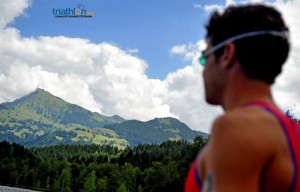 Graham was out racing this one.

This race was a qualifier for the 2014 European Standard Distance Triathlon in Kitzbuhel, Austria.

We travelled up on the Saturday for our usual reccy of all of the bike course, transition and the reservoir as well as the Ins & Outs.  After this, we went for a meal at the local pub & on the way back, via the reservoir, there were about 15 hot air balloons in the beautiful evening sky with the sunset rapidly approaching.  As we entered the car park one of the balloons was coming down extremely fast & we both thought that it was going to ditch in the water but it was all part of showing off to the customer.  The balloon must have been only about 5mtrs from the water, which was pan flat, & as it travelled over the transition area, the race crew were having a chat with the ballooner, asking if he could come over again the next morning just before the race.  However, we didn’t see him again.

Anyway, back to the race.  The last three weeks of training, after my podium position at the Reading Tri (2nd place overall), had gone very well with good run & bike times and the swimming seemed to be coming together.  A positive last week taper running into the race, so I was in a very good place & looking forward to the race.

Race morning dawned as a cloudy but dry day with a coolish tinge to the air & it was not too windy either.  My wave was not off until 8:50am so transition was all set up & I was ready to go.  And as they say, the sun always shines on the righteous because 5mins before my swim wave started the sun broke through which turned the day into a warm, pleasant one.

My swim wave consisted with my age group plus the next one above that, so I positioned myself with the most direct route to the first buoy.  I then managed to find myself possibly, with my sighting, in the top part of the echelon.  The swim just felt comfortable, with not too much bumping and bashing, so I just got on with the job in hand.  With the one lap swim done, it was into T1 where I had to tread carefully as my route to my bike seemed to have all the big potholes in it, but I got there without injuring myself.

Out onto the bike course which was stated in the race info pack as being 42K but I measured it as only being 21.5 miles (a bit short then).  It was an out & back small loop, past the start area then an out & back bigger loop.  Now the first small loop included a good descent but it didn’t bode well for me because I got stuck behind a car who was unable to overtake the cyclist in front, which was a bit annoying, but I kept calmish.  I then headed out onto the bigger loop where I eventually managed to get into a group of about 5 of us (no drafting of course) so after a lot of attacking each other trying to get out in front, two of them got away & just left the three of us.  In the end the speed was so good from the two in my group that I gave up wasting energy trying to get past them, so I just sat on the back of them (no drafting again of course).

Heading towards T2, I wanted a clear run into transition so sprinted past the both of them & had an excellent dismount (so Coach 2 said) & raced into transition.  Then headed off onto the run which was a short out & back loop across the dam and then a longer loop through some fields, country lanes, off-road tracks (in fact all sorts of terrain).  Onto the first part of the run across the dam the running was feeling good as I was managing to overtake a few people unaware of what position I was in in my age group because there was a mix of everyone.  I then headed off onto the second part of the loop but had a little bit of a bad spell heading towards the turnaround point because I wasn’t sure how far I had to go, but what got me into the right mindset was I noticed that two of my age group competitors (who were better runners than me) were now chasing so I had to dig really deep to get this run done.  Yes, it is not the fastest run time but it felt like one of my best runs of the season.

I crossed the line thinking that there was nothing else I could have done out there to improve that race.  Was it good enough to qualify automatically?  Very unlikely – but I would have to see if I could get a roll-down slot.  Only time will tell.

PS:   Saturday 28th September  – I have just received an email from British Triathlon saying that I have qualified automatically.  Yipppeeeee.  So myself & Coach 2 are now heading off to Austria in 2014 for the race as well as a bit of a holiday.