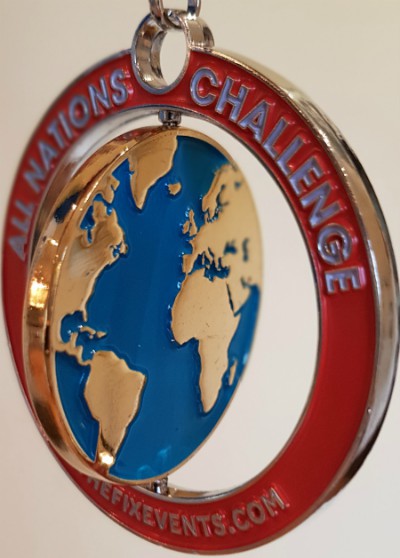 The prep for this one was that last Bank Holiday Monday, myself & Coach 2 went down to Southbourne beach for a sea swim just to get mind & body acclimatised to the cold water.  I spent about 15mins(ish) but not all of it was swimming, but just getting used to the cold water.

We headed off to Dorney Lakes with a semi-normal Saturday alarm call as I wasn’t due to start my race until 10:14am.  I got a little bit panicky as the M4 was restricted to 50mph for miles & miles & the clock seemed to be moving faster than I was, but luckily we still arrived with plenty of time to register.  Registration though was very slow.  I then racked my bike & reccied the ins & outs.

The swim was a short one this time of 400mtrs but I managed to be first into the water so I had a little bit of time to do some mini-sprints to warm up.  I started on the left hand side as the masses started on the right so I managed to get a nice clean start to the swim.  I had no untoward issues as it was just in my mind that this was a very short swim.

I exited into T1 & then headed off onto the four lap, 20K bike ride.  Literally with the four waves on the bike course at the same time, I spent most of it overtaking people, which was nice, but not some people understood the concept of “on your right” which caused some hairy moments.  But yet again, with Dorney, one gear up one side & a bigger gear coming back the other way.  Personally I thought that I was riding quite well.

Into T2, where transition seemed to be coming together now, which is good. 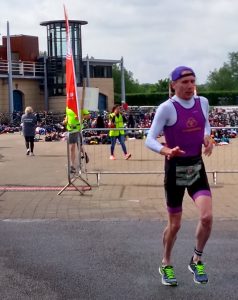 I then headed off onto the two lap 5K run, which again had no issues.  However, as you leave transition to get onto the run loop, there was a bollard where you turned to start your second lap.  At this point a young lady turned round, I overtook her but in a short amount of time, she passed me.  She was going at a very good pace so I hung on just until the end of my lap one when she sped off to the finish line, so I was thinking to myself “I hope I haven’t done too much too soon”. 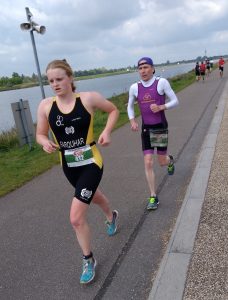 At the start of my second there were still a lot of people to try to overtake.  I was overtaken by a few quick boys but I just concentrated on myself & my race.  Job done.