We travelled to Weymouth on Saturday afternoon.  It does seem strange to travel up & then stay on the Saturday, but we wanted to do a reccie the course & to have a reasonably good night’s sleep without having to get up at stupid o’clock to get there.  Saturday in Weymouth was lovely with calm seas with just a trickle of wind, not overly sunny as there was some cloud but it was very warm.

This event was organised by Bustinskins & they have been going for 6 years & this was my first time of doing one of their events.

We had an early alarm call at 4:30am on Sunday morning & arrived at Bowleaze Cove whilst it was still dark.  There was a bit of a quick turnaround because registration was only open for an hour & in that time we had to get everything set up & reccie the ins & outs.  The weather was now not sunny or calm sea but it was very overcast with a very fine drizzle & we also had picked up a very strong wind.  As the warmth of the previous day had gone, Coach 2 had to resort to putting on my Dry Robe to keep warm & dry (#typicalBritishweather) !!!

I entered the sea for a one lap 1500mtr swim.  The wind was blowing right to left so the initial get out to the first buoy was reasonably difficult because of the waves but then when we turned right to head into the wind, that’s where life got a little bit difficult & I just had a couple of issues where I had to stop & recompose.  Eventually we got to the last buoy on the outward leg & turned & made our way back towards the shoreline.  At this point I managed to start to overtake some of my fellow swimmers.

Into T1 which was a bit of an Ooo Ahh Ouch moment as we had to run over the stony beach to get to the tarmac road bit to the car park which was where transition was.

I now headed off onto the 40K bike route which I would describe as a proper course.

Well, it was to my liking anyway.

There were lots of good hills, rolling roads & winding narrow lanes.  Within the first 50mtrs of exiting T1 we were climbing.  Coach 2 was on the side-lines & took a snap of me climbing up this hill like Contador would’ve done. 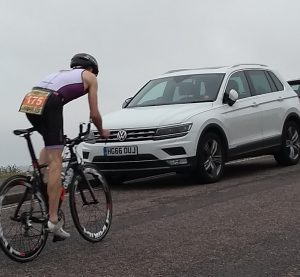 Within another mile we were climbing up the biggest of today’s climbs & I needed to grab the lowest gear I had to get up this one but going has its advantages because going down the other side I topped out at 41.2mph which did become a little bit scary at times because with the ever increasing wind, which would blow you from side to side at times.  Onto the most annoying part of the ride was that I was now on the rolling, faster part of the course only to come to a set of roadwork traffic lights which were red.  I didn’t do what the three idiots in front of me did who all jumped the red lights, but I stayed put & in the meantime 1, 2, 3, 4, 5 & 6 fellow competitors arrived next to me.

The lights then turned green & then we headed off again.  We were now on the most difficult part of the ride, heading back into Weymouth as it was now a full-on head wind & was only managing to max out at 12mph!! (was that a snail overtaking me???).

To get back into T2 I then had to descend the first hill which had a couple of speed-bumps just before the dismount line so I had to get it right with the braking & dismounting because I descending at 30+mph.

Into T2 & then headed off onto the one lap run route which consisted of running through a holiday park & then around Lodmoor Country Park so after such a tough bike ride the legs, surprisingly, felt pretty good.  Within the first couple 100mtrs I had a young lady to sight on & I gradually pulled her back in the first K but then for the next 6K I was running on my own with no-one in sight & no-one behind me.

The only good thing to take my mind off the pain was three super heroes giving out drinks at a drink-station, which also had Pharrell’s “Happy”~ blasting out from their vehicle. 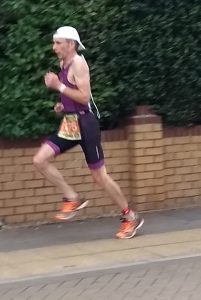 Eventually, I managed to catch sight of someone in front of me which added my incentive as it had become a bit of a lonely run.  Annoying, as I caught someone, someone else overtook me (damn).  To get back to the finish line, I had to climb the monster hill which was part of the bike course.  I had a little bit of a carrot in front of me because one of the back markers from the sprint race was struggling up the hill so managed to chase her down & overtake her, which kept my morale high.  Then with a quick swish down the last hill, I crossed the finish line. Ouch.