I know that this is another duathlon & I am supposed to be a triathlete, but I didn’t want to be known as a Peasant any longer, so if I could finish this race then I would be upgraded to a Knight.

This literally mirrored what I did last year, which was a swim on Saturday morning, come home & load the car then head off on a 3 hour drive up to Ludlow.

When we got there we did a reccie of the bike course just to refresh my memory.  I then went to register at the Brewery then we went for a gentle stroll around the town & admiring the historic buildings as we went.  We then headed back to our B&B for dinner then bed.

Race day morning was a little bit on the chilly side, but not too bad.  Transition was done & dusted in plenty of time.  I was in the 4th wave, off at 8:09am.  The first run was two laps equalling 10K.  Each lap consisted of the Lactic Ladder & the ascent up the Wall that led up to the Castle. I remembered to take the Lactic Ladder nice & steady knowing that if I went too fast, things would turn a bit nasty later on.  I managed to run what I thought was reasonably well. 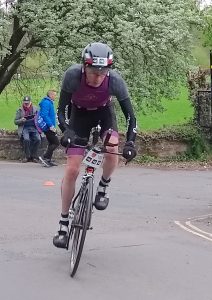 The bike course consisted of rolling terrain, but two nasty points were a 7K climb (about 10 mins riding) & then nearing the end was another very steep climb.  On the final bit of the 7K climb, I got caught by two guys & between the three we had some good racing to the foot of the final climb but I knew what was over the top of the climb, so I worked really hard to try to drop them, which was successful, & then a 41.3mph (max) descent back into Ludlow.

Had a bit of a slow transition into T2 because there was an ambulance blocking the route into transition as it looked like a man had binned it getting off his bike.

After navigating around the ambulance into & out of transition, I headed off onto the two lap, 5K run which consisted of another two times up the Lactic Ladder.  Surprisingly I felt OK until the two chaps that I’d overtaken on the bike overtook me.  I was unable to catch them back up but controlled my running as I knew that I had one final ascent up the Wall & then finally into the stunning grounds of Ludlow Castle to become a Knight.

I have to admit that this was a very painful way to become a Knight though.

Recovery was helped by sausage rolls & pastries that were supplied by the sponsors & Coach 2 had the beer.