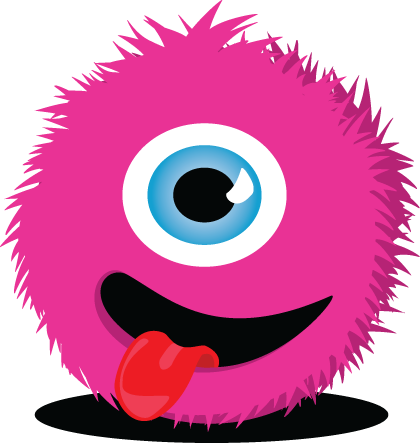 Podium place at the Monster Mojo

Can you enter a race just because you like the look of their logo?

Well, I did which was back in October 2017.  The Monster Mojo is a middle distance triathlon & I haven’t done one of these since 2010 but as they say that you can do a middle distance race off of the back of Olympic distance training, so all that I tweaked in my training was that I continued my 3 hour bike ride up until May.  That was 21 of them & 7 of them had an hour’s run off of the back of it.

Could I make a reasonable effort & not make a complete numpty of myself?

Having kept an eye on the weather for this weekend for most of the week, it didn’t look that great for Sunday – probably wet & windy.  So we travelled up to Peterborough on Saturday & did a reccie of the bike course before registering then headed back to the hotel for dinner & an early night.

Sunday morning dawned with a 4am wakeup call & the real heavy rain that we had had overnight had cleared but the roads were still very wet.  Although it was dry now, & cloudy, we were relieved to hear that the wet day was now going to be a dry one so we arrived at the rowing lake to set up transition & had plenty of time to do a warm up run.  As well as a middle distance race, there was also an standard distance one on the same day.  I entered the lake for a prompt 7am start with the standard distance racers starting half an hour later.  There were no untoward issues in the swim & with it not being the biggest of fields, I managed to keep myself out of trouble & quite enjoyed it.

Into T1 for not the quickest of transitions because I had to put socks & my nice new Synergie jacket on top of my arm warmers & as I was going to be out for 82K, I didn’t want to get cold. 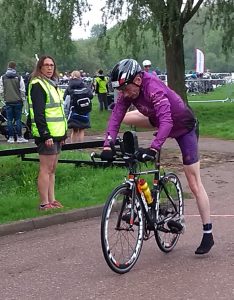 The bike course started with a 4 mile road trip through a housing estate & then into the country which then consisted of a three lap circuit before returning back to transition.  The course was undulating & the ride was uneventful.  The only really bright spot in it was seeing Coach 2 parked up just at the start of each lap. 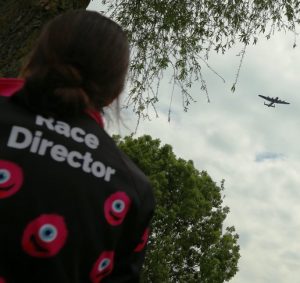 The first lap was a little bit too racy, when I think back on it, but that was the reason I was there. 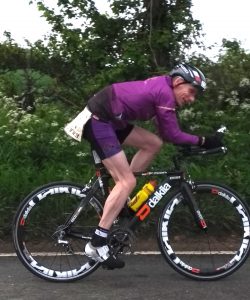 Nutrition was a big part for me so every 10mins I took a drink, every 30mins I had a small piece of energy bar & every hour a gel.  On the second lap, there wasn’t so many people around so I settled down to my own rhythm but by the third lap things started to hurt a bit.  Now this was a real lonely lap until I started the 4 mile trek back to the lake where a few people started to overtake me, so I lifted the pace to try to stay with them.

Into T2 for another slow-ish transition because I decided to change socks.

This was because transition was set up in a field that had calf length grass so I had soggy feet from the dismount line to where I racked my bike.  Because I wanted to be comfortable for the 4 lap, 20K run which was why I had made that decision.  As I headed off onto the first lap I left with another guy & just sat with him for the first half but decided that he was going a bit too quick so regretfully backed off a bit as I started to look at the bigger picture.  Lap 2 was OK as I had settled into a steady pace.  Lap 3, I managed to catch one guy who seemed to be running at the same pace as me, although a bit slower than the previous two but I had to make a quick stop for a comfort break but I managed to pull him back by the end of lap 3, which I was very pleased about.  Then we were joined by a very tall man & possibly his wife who was running with him (surely outside assistance!!!) so the four of us were running all together.  For me, I was now in unknown territory as my longest run had only been for an hour but to my surprise, I managed to drop both of them in the final half of the final lap but to add to all the pain that in my legs, nearing the final 100mtrs, Coach 2 was on the side lines telling me to sprint (you are having a laugh!!!) but sprint I did not knowing that one of the guys was closing in on me, but he did not pass me so thank you Coach 2. 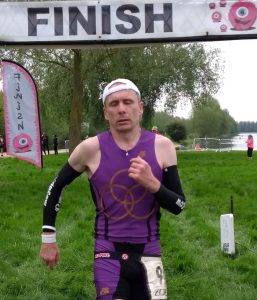 After I had crossed the line I crumpled on the grass & started to sob, which had never happened to me before.  This was for the fact that I had finished a hard fought race.  However, I was really happy that I had managed to complete a distance that I hadn’t done for a long time & can proudly say that I hadn’t made a numpty of myself. 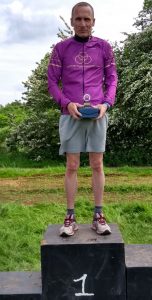 Note from Coach 2 – I am so proud of Gra.  He put himself through a lot but deep down I knew that he could do it & do it he did.