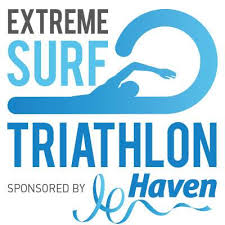 There are four reasons why we are returning to Perranporth:

We arrived Saturday lunchtime to find the sea was lovely & calm.  The sun was also out.  However, would it stay like this for tomorrow’s race?  We then did a reccie of the bike course, which was mostly to refresh my mind of the tricky descent on the course.  Registration came next & then we relaxed for the rest of the day.

Sunday turned out to be a cloudy start to the day & we both had a deja vu moment when we saw the weather as we opened the curtains as it looked alarmingly like last year!!! The bad thing was that the wind had picked up & the sea was not as calm as the day before.  However, it was nowhere near as bad as last year. 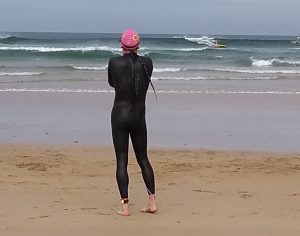 I rode down to transition whilst Coach 2 had breakfast.  This was a very rare event for her as the starts are usually so early that she has to eat on the go.  I set up transition & waited for Coach 2 to come down to meet me.  The race briefing was scheduled for 8:45am but they were running a bit late so it was at 9am instead.  This gave me a bit of time to get into the sea & do a few practice strokes under the waves before the 9:30am start.

I started on the righthand side of the start line & had a clear run into the sea for a 1500mtr sea swim.  I still had a few issues getting started but once I had gotten past the rollers, my swimming started to go well.  I soon found my rhythm & felt that everything was going well.  When I got to the shoreline & stood up because I couldn’t swim any further, I found it difficult to run through the surf.  It was a very long run through the sand to get to T1.

Into T1 for a swift transition & then out onto the three lap, 38K bike course.  Each lap consisted of 10mins of constant climbing.  I think I got a little bit too racy on lap 1 because I struggled a bit on the second lap on the climb, & now I was relatively on my own so I settled into my own pace.  The third lap went OK & got overtaken by two people. 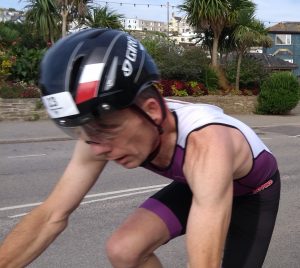 Into T2 for another quick transition & then out onto the 8K (I think) run which now had been changed from last year because of the high tide.  This is how you make a hard run even harder – they took us up a flight of steps, over a massive sand dune, then dropped down a steep concrete zig-zag onto the beach & then onto the same course as last year.  The first part of the run was tough through the loose sand.

I managed to run up the whole of the sand dune but it felt like my toes were coming out of my shoes as I came down the concrete zig-zag.  Now I’m on the beach where the sand was a lot firmer so I could now get into a proper run rhythm.  I reached the turnaround point, had a quick drink & then retraced my steps to the concrete zig-zag, which I just managed to keep running up (more like a slow jog than a full blown run). Then we went up another sand dune & I openly admit that I had to walk up the final bit (we did find out after the race that only one person managed to run up the whole thing – so that didn’t make me feel too bad).  The final section before we got back onto the beach was down a tricky descent, i.e. down a grass bank which I took very carefully as it was full of rabbit holes & I didn’t want to do anything silly.  I then headed off onto soft sand again for the final stretch to the finish.

Overall Position – 29th & 1st in my age group (mind you, one of those above me was part of a relay team.  There were also two women ahead of me as well!!!) 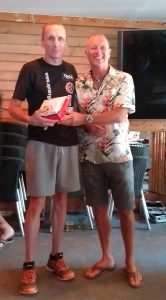