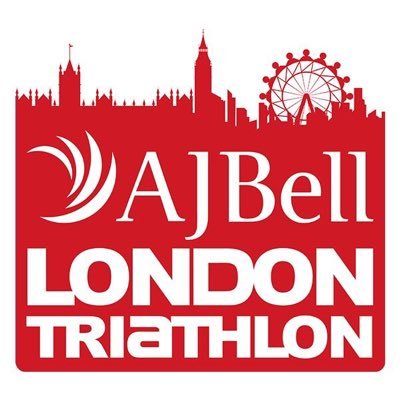 We travelled up on Saturday morning after I did my usual 3K pool swim & arrived at our hotel which was approx. 200mtrs from the Excel Centre.  This was the start & finish for the triathlon & where registration & expo were, although the expo was pretty rubbish this year!!!  As it was 32oC outside, we then spent the rest of the afternoon in our airconditioned hotel room watching the women’s European Champs road race then had a cheeky afternoon kip.  They said that it would be even hotter on race day.

Race day arrived with a late alarm call at 6am because I wasn’t due to start racing until 9:45am, so we had time to go down to breakfast in the restaurant where I had my usual breakfast & Coach 2 decided to help herself to the wide selection of croissants & hams.  We then had a slow meander across the car park to the Excel Centre to rack my trusted steed & then off to the holding pen for the Race Briefing.  The Briefing did go on a bit & I was very annoyed when I finally got into the water where they told me that I only had 30secs before the race start.  This was not the best start to my race.

Having watched the races from Saturday, I had decided to start on the left hand side to avoid the usual washing machine effect.  However, after having swam a couple hundred metres, I then started to move to the right to merge with the now very strung out wave.  The swim went very well & once out of the water I had a quick wetsuit change & placed it in the plastic bag which they had ready for me.  I then had to run up a flight of stairs & then half way round the Excel Centre with my wetsuit in bag in hand. 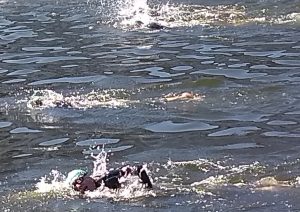 I then headed off onto the one & a half lap bike course (23 & a bit miles).  Even though it is on closed roads, it can still get very busy with all of the various waves on the road too.  On the first stretch of the bike course, going along the Embankment heading towards Big Ben, I felt OK but when I did turn I noticed that had about six people all behind me.  How long had they been there???

Heading back towards the Excel Centre, one of the guys flew past me & then another two which I could hang onto, but lost them on the little climbs over the bridges etc.  We then stayed together on the extra half a lap.  I knew the finish into the Excel was tight & up a steep incline before the dismount line so I made a concerted effort (like Alaphillippe holding 600 watts ?) just to get to the dismount line on my own & have a clean run into transition. 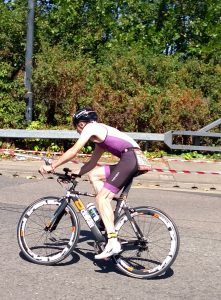 I then headed off onto the four lap run course & it was now very hot & very busy along the run route.  In fact it was so busy, at the first drink station I had to miss it because I just couldn’t get to it.  I did however manage to get one on the way back & with the little climb that took us into the Excel Centre, I learned from my previous encounter, just to back off a little bit & then return to normal running pace.  Although it was baking outside, when you entered the Excel the temperature plummeted because of the air conditioning so when you ran back outside, it was even worse.

They had to put another water station out on the course because it was so hot. 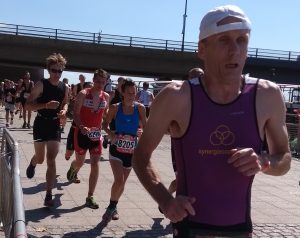 On the final lap, I spotted a guy who rode away from me at the beginning of the bike ride & my sole effort was to catch him.  He was coming back to me, but very, very slowly.  But once we got into the Excel Centre he was a lot closer so with a final effort I managed to get past him with about 5mtrs to spare before the finish line.