Leeds was the third race in the National Series for the Youths & Juniors, although some had raced at Blenheim the weekend before trying to secure Youth Olympic Games or UK School Games qualification. The quality of field across Youth & Juniors was high with the number of Youth Males meaning that there were two wave to ensure all got a chance to race. So some fast & frantic racing was guaranteed.

We know that Ryan is pretty strong in the swim and tends to get out of trouble, this season in the male races there have been reports of athletes being purposely dumped & swum over and some chaos at the first buoy.

A strong swim saw Ryan exit the water in first place, then it was a long run into & out of T1 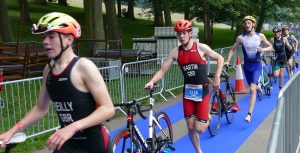 Ryan kept himself in the mix on the bike, doing his share in trying to get onto the first pack before heading into T2 with a pack of 15 or so athletes. 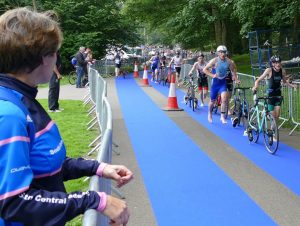 Out on the run and Ryan was battling to hold onto his place, toughing it out to finish 14 out of 67 finishers. 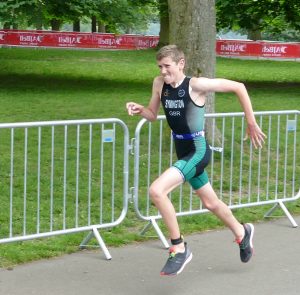 Here is Ryan’s take on the day – 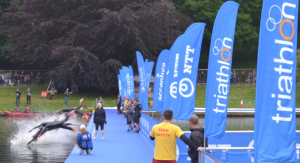 A busy weekend for me started with The Leeds Triathlon for GB Youth, my race started well with a pontoon dive start, there seemed to be a lot of us swimming together toward the first buoy getting tighter together the closer we got to it, I rounded the first buoy in about tenth place and made my way up the outside of the pack to avoid getting further battered, by the time I got to the exit ramp I was joint first and out of the water and heading to transition in the lead. Transition was ok but on the run down to the mount line one of my bands snapped making it difficult to get my shoes on cleanly, normally that wouldn’t be a problem but on this course the hill right at the start is difficult to ride without shoes on.

Yet again I missed the first pack and ended up riding with one other boy until a second pack caught us near the end of the bike leg.

My run wasn’t as good as I would have liked not helped by having to do too much riding, I’m looking to get into and stay in the lead pack sometime this season, I can then concentrate on getting my run up to speed.

I finished 14thwhich is respectable and a slight improvement on last time out.