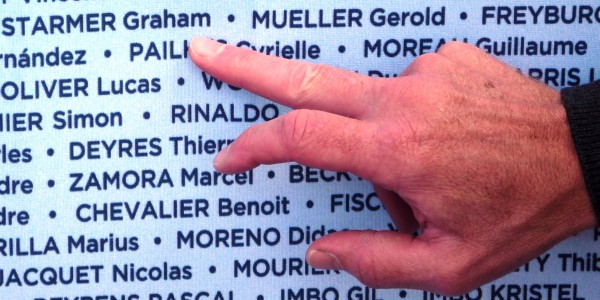 Myself & Coach 2 have been waiting for this 2 week break away to France for a long time. 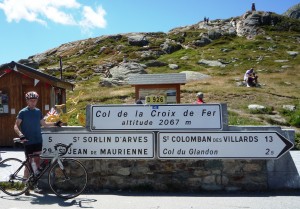 As for the race itself, I don’t know what the weather Gods were thinking but for 9 days running up to the event we were either in the high 20s or mid to high 30s.  It was glorious weather & lovely & warm.  But on race day morning, it was 16 degrees & pissing down with rain – very reminiscent of my last race here back in 2011 !!!

The first thing we had to do was to take the run shoes to the top of ADH to drop them off in T2.  We went by car to do this.  We then headed back down to our house in the centre of Bourg d’Oisans to collect the bike & take it to Lac du Verney, located at an altitude of 700mtrs & about 5 miles from Bourg.  I racked the bike in a field of 1200(ish) competitors, which was quite spectacular.

I was also undecided on clothing (arm warmers on or arm warmers off!!!).  I also put the Synergie gillette on, then took it off again.  But in the end I decided to wear neither & went hard core.

I entered the lake but it was so cold from it being full of glacial water running off from the top of the mountains into the man-made lake.  I tried to do a warm up swim but with so many people in such a small area it was proving to be very difficult (did I mention that this was a mass start!!!).

The gun went off & the pandemonium started, but I managed to get to the side & found some calmish water. However, the cold took its toll on me & my chest started to tighten up & I had difficulty in breathing, which is a slight issue when you are swimming.  I paused for a little while then got going again, but it didn’t get any easier &, if anything, it got a bit worse so I had to take time out on the side of the lake.  Luckily I was close enough to the rocks to sit at the side & compose myself, but in the meantime I am losing places hand over fist.  Not good.  I eventually get back in & when I got going, this time I managed to settle into a good rhythm & started to overtake people.  To get to T1 there was a near vertical ramp out of the lake which was matted, once there I had decided to put socks on as my feet were so cold & because of the long climb in wet & windy conditions.

Most of the ride was chaotic & dangerous as there were so many competitors out on the road at one time because of the mass start (God help age group racing next year).  There was also a lot of traffic which included spectator cars parked along the side of the road as well as the usual general traffic flow, but I managed to keep myself out of trouble.

Most of the ride to the bottom of the Alpe was done on fairly flat roads where my speed was between 25 & 30mph.  It was so quick because we were in groups much like the peloton in the TDF & nothing like the usual triathlon bike section.  I got to the foot of Alpe D’Huez which I was really looking forward to doing as I had purposely decided not to ride it beforehand.  I just rode my own race up the Alpe on 34×28 which I found was a good gear to get up the climb, but I still had to a bit of dodging & weaving to get around some of the people.  Most of the climb was done in the rain (note to self – don’t try to climb out of the saddle when riding over TDF names written across the road – very slippery!!!).  It was also getting very foggy in certain areas of the climb but then it became very clear on other sections.  On the penultimate ramp, I got a shout out from Chrissie Wellington & Tom Lowe (name-dropper!!!) who had been here to support & encourage their prodigy who had done the long course race the day before.  I had a strong finish on the final bit of the climb through the village & to transition.

Into T2, which seemed to be quite a good transition, then out onto the one lap run which consisted of gravel tracks & tarmac with 3 good quality climbs & steep descents which they managed to get bundled up into 7K of running – where we are now at an altitude of 2000mtrs.  To my surprise, my legs felt OK after an hour of climbing the Mythical Mountain & started to overtake quite a few people but only got overtaken by 4 on the whole of the run.

Oh, & by the way, it is still raining but not too cold but once I had collected my post race T-shirt & bits of Kiwi fruit, melon, orange, crisps, peanuts, cola, brioches, sultanas & raisins (nothing like a post-race feast!!) I was starting to get a bit cold.  So cold that I was now wearing hat, gloves, 2 T-shirts, a fleece, a rain jacket, trousers & leggings.