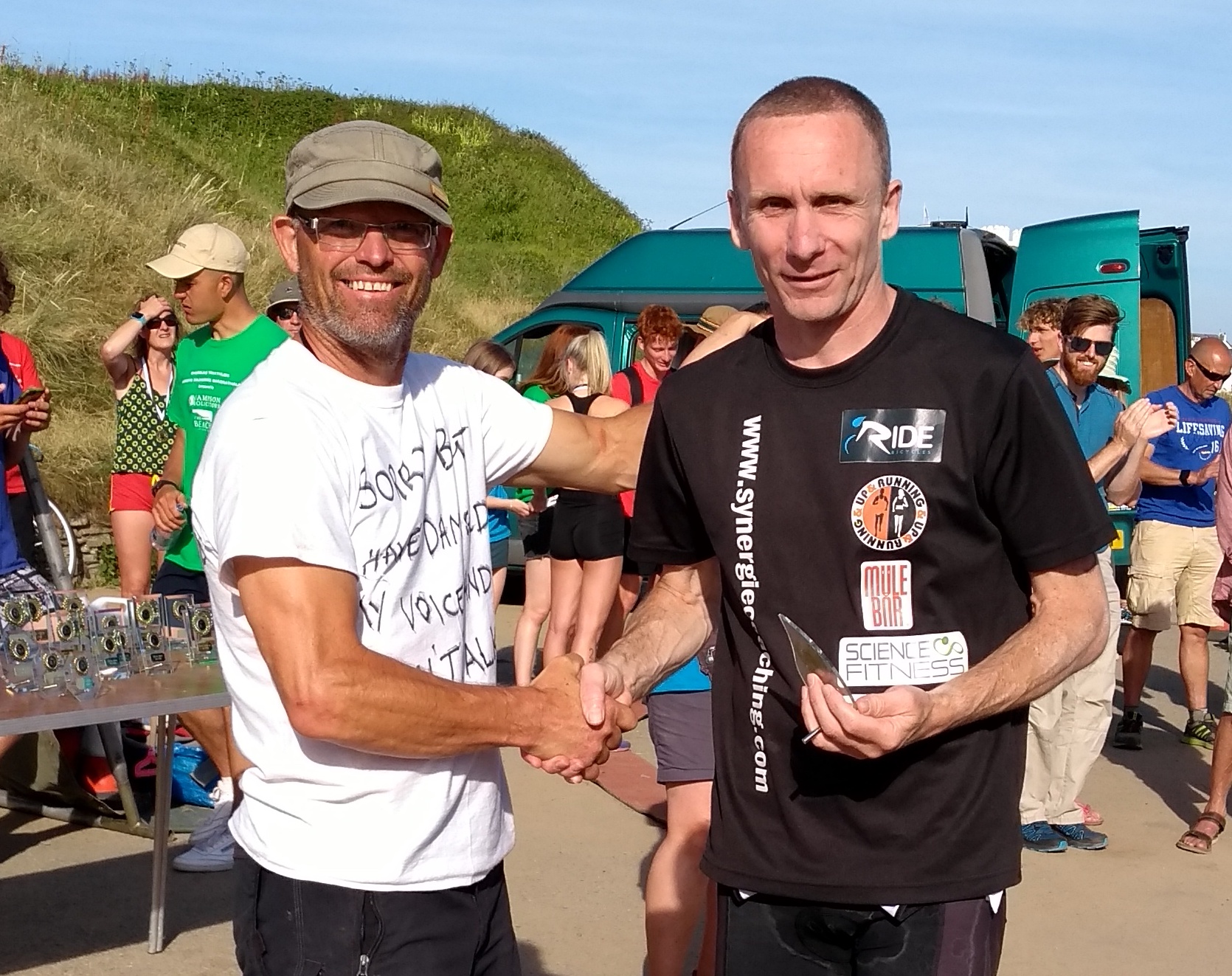 Another new race for me.  We decided to go up to Bude nice & early on Saturday & landed there at around 11am & enjoyed walking around the town as well as the beach.  We also managed to squeeze in a reccie of the bike route.

Sunday was a bit strange, although eventful because the race didn’t start until 4pm so woke up early & decided to go & ride the course.  It was a very easy ride.  I then followed that up with a 10mn run.  After finishing that, I still had 7 & a half hours to go before the race started so I had to decide what to have for breakfast.  I decided on yoghurt with fresh fruit, two crumpets with bacon but then after breakfast I had to take Coach 2 to the Minor Injuries Unit in Stratton, which was a few miles away from the B&B, as she had managed to pick up an eye infection…

After returning from the hospital, we started to watch the England game against Panama but only managed to watch the first half because I then had to register & get ready for the race.  We were now at 28oC – nice & toasty.

This event can only be described as old style triathlon.

The racking was bits of old pipe strapped together, no swim hats, no bike numbers, anyone & everyone allowed in transition so we had people walking through transition from the beach, dog walkers etc.  It was really laid back.  The reason for the 4pm start was due to the tide.

The swim was a one loop, 5oomtr swim & I was in the third wave.  Having watched the two previous waves, some were taking the long route through the boats to the turning buoy but I decided to take the most direct route straight to it.  I wasn’t the only one doing that either as I’d seen others doing the same thing on the first two waves.  I exited the swim & had a fairly long run to transition which was up a slight sandy hill to T1.  En-route to T1 I picked up a handily placed water bottle to wash the sand off of my feet whilst running to transition.  Others who had done it before had taken their own bowls so that they could dunk their feet in water next to their bikes.

The bike course is a one lap, 11 mile course & very lumpy.  There was a difficult start to the ride because within 5mtrs of exiting T1 you turned sharp left & up a 200mtr steep climb. Also the mount line was right outside the exit so obviously this was an extremely busy area as most of the athletes were getting onto, or trying to get onto their bikes, right outside of the transition exit.  I had already decided to take a wide right hand deviation around them to get a clean exit & just managed to get my feet into my shoes before the climb.

The town was very busy & up the first climb but once over the top it had settled down.  The only other interesting part of the ride was after finishing all of the climbing we had a fast decent back into Bude but after my reccie this morning & Saturday’s drive around the course, I didn’t want to get stuck behind anything so when I reached the roundabout to turn left, I put in a Mark Cavendish-like sprint (500 watts plus ?) to get in front of a caravan.  So I then had a good run back into town but then lost a bit of time getting to T2 getting stuck behind the dawdling holiday makers heading to the car park where transition was situated.

Into T2 for another quickish transition & headed out onto the one lap 5K run.  Unfortunately I had to run up that pig of a hill again but not as fast up it as I had done on the bike.  I started to get into my run stride after a steep descent into the town & a bit of vocal support from Coach 2 always helps.

We then ran along the canal path & when we reached a bit that I didn’t know anything about.  We turned right over a bridge & then up another steep hill which was at least 1K+ (nasty).  It was then that I got overtaken for the first time in the race.  I managed to get on with the run but had a little bit of a struggle towards the finish, but otherwise I was quite please with how the race went.